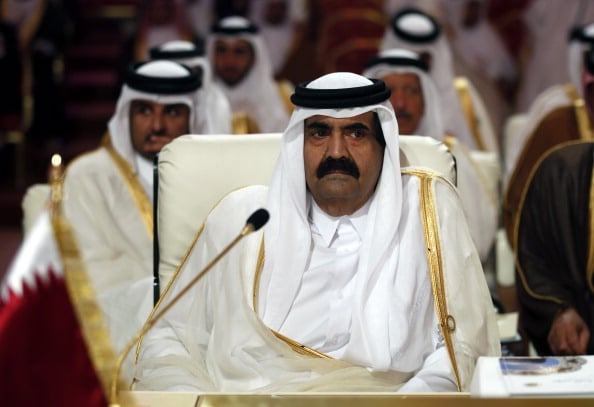 In a seven-minute speech aired on state television, Sheikh Hamad said it was now time for the new generation to take over following his 18 years at the helm of the small, rich Gulf Arab state.

“The time has come to open a new page in the jouney of our nation that would have a new generation carry the responsibilities … with their innovative ideas,” said Sheikh Hamad, reading a prepared text behind his desk.

“I address you today to inform you that I will transfer power to Sheikh Tamim bin Hamad al-Thani. I am fully confident that he is qualified for the responsibility and is trustworthy.”

The emir did not specify when the change would take effect but a Qatari official had said the move, once announced, would take immediate effect.

The 61-year-old emir made no mention of the fate of veteran politician and the public face of Qatar’s aggresive foreign policy, prime minister Sheikh Hamad bin Jasim al-Khalifa.

Diplomats have said the emir, who overthrew his father in a bloodless coup in 1995, had long planned to abdicate in favour of 33-year-old Crown Prince Sheikh Tamim.

Tuesday was a national holiday in the country of a one-family absolute monarchy has ruled over for more than 130 years. The royal court has invited Qataris to go to swear allegiance to Sheikh Tamim on Tuesday and Wednesday.

Qatar is geographically small, with two million people, but is the world’s largest exporter of liquefied natural gas, a global investment powerhouse and a financial backer of Arab Spring revolts.

The emir has also elevated Qatar’s international profile through the launch and development of the Al Jazeera television network, as well as its successful bid to host the 2022 soccer World Cup tournament.

Qatari state media said Sheikh Hamad had formally informed family members and top decision makers in the US-allied state of his decision at a meeting in the capital Doha on Monday.

Qatari political analyst Mohammed al-Misfer said he did not expect major changes to foreign policy or domestic plans after the handover, adding that Sheikh Tamim was already involved in running the country under his father’s direction.

Arab and Western diplomats said they understood the motive was the emir’s desire to have a smooth transition to a younger generation. Such a transition would be unusual for Gulf Arab states, where leaders usually die in office.

“This precedent will not be easily received in the region,” Misfer told Al Jazeera.

Qataris appeared to take the news in their stride.

“We are not surprised. The emir has been introducing his son for a long time. Hopefully, it’s a good step,” Khalid Mohammed, a 21-year-old Qatari student said on Monday.

Qatar has played a big role in promoting Arab Spring protests, lending significant support to rebels who toppled and killed Libyan leader Muammar Gaddafi in 2011 and to a continuing uprising against Syrian President Bashar al-Assad.

It has also played host to a delegation of the Afghan Taliban, which opened an office in Doha last week in preparation for expected talks with the United States about how to end a 12-year-old conflict in Afghanistan.

Other political crises and wars that Qatar has tackled include Yemen, Somalia, Lebanon, Darfur and the Palestinian territories, often arranging for peace talks on its own soil to show it can punch above its weight in international diplomacy.