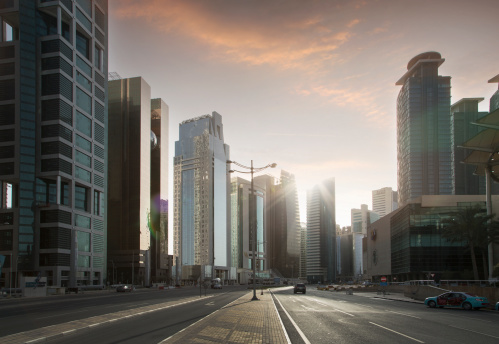 Construction of the Sharq Crossing, Qatar’s $12 billion bridge and underwater tunnel link across Doha bay, was due to start this year to be ready for the 2022 World Cup, but that deadline has slipped as the government shifts priorities.

The Gulf state’s plans to splurge $200 billion on infrastructure as part of its 2030 development plan has lured foreign contractors to what promised to be big profits, but project delays and problems with contracts and bureaucracy have left many in difficulties and their returns uncertain.

The government, too, appears to be reassessing its plans, although officials allude to a temporary but indefinite halt to projects rather than cancellations.

Other schemes that have been put on hold include a multi-billion dollar chemicals plant north of the capital Doha and Doha Grand Park, modelled on New York’s Central Park.

“Qatar has mothballed a lot of vanity projects,” said a source at a construction company operating in Qatar who spoke on condition of anonymity. “It’s indicative of how the country’s grand aspirations have been toned down a little bit.”

Corruption allegations that have rocked soccer’s governing body FIFA, have put renewed media focus on Qatar and its hosting of the 2022 football World Cup, although Qatari officials say they are confident the event will go ahead as planned.

The World Cup directly accounts for only about $10 billion of the $200 billion development programme, but uncertainty about the tournament is adding to a testing environment for foreign contractors in the Gulf state.

While Qatar’s vast wealth from natural gas production has enabled it to splash out on new infrastructure, it is doing so on strict terms.

“Qatar … fears being taken for a ride by international consultants – that this is a gold rush, a boom town, and companies are going to fleece them for as much money as they can,” said the source.

Clauses in some contracts can make consultants financially liable for several years after the project has been delivered.

“Construction companies and consultants are bank-rolling the projects for their clients,” said the source.

Getting their money back can be a lengthy process.

“Project exposure is tens of millions of dollars, which becomes untenable – they tie us up in their approvals process ad infinitum,” said the source. “The money trickles out eventually, but you want a fair day’s pay for a fair day’s work. They (Qatar) try to shave it off at various stages.”

Middle East companies and local joint ventures seem to fare better in Qatar because they are seen as long-term investors in the country.

“We prefer somebody who comes to work with us, not only for one job and then leaves,” said Jalal Salhi, infrastructure affairs director at Qatar’s Public Works Authority (Ashghal), which is in charge of the Sharq Crossing and other projects.

International construction firms or consultants can only apply for projects worth more than about 200 million riyals ($54.93 million), said Salhi.

Many opt for joint ventures to ease cash-flow strains – a local partner employs around 90 percent of workers and gets about 60 percent of the money, with an international firm providing the more expensive employees.

“Contracts in the Middle East generally favour the client more than they would in the West, for example. There are a myriad of clauses that make the contractor liable,” said Nick Smith, Partner at engineering consultants Arcadis in Qatar.

Clients unwilling to pay for design alterations is one obstacle, said a second construction industry source who spoke on condition of anonymity.

“Most contractors suffer major cash-flow shortages, in part because clients don’t accept paying extra for essential changes due to the original design plans being late or inadequate and unworkable unless amended,” he said.

For the World Cup, Qatar has appointed project managers to build five stadiums to host games, but must use 8-12 stadiums as per the bid terms.

“However, it is a massive undertaking and the first for the Middle East, so the scale should not be underestimated and maybe we shouldn’t be so surprised at the time taken.”

The World Cup has thrown the spotlight on labour conditions in Qatar. Human rights groups and trades unions say construction workers have died due to poor conditions on sites. Qatar denies the claims.

It has promised broad labour reforms, but has not set a timetable. Foreign companies complain that for each project the Ministry of Labour allocates each company a set number of visas for workers from a particular country, often regardless of whether there are people from those countries willing to take the job.

“The quota system is extremely challenging and ultimately this affects our ability to perform and deliver,” said ALEC’s Bergesen.

Ashghal has only issued four consultancy tenders for projects this year, compared to 25 issued between mid-Feb and end-December last year, its website shows.

Ashghal’s Salhi said some foreign companies turn away after realising how much competition they face.

“Some of the contractors, they came, we pre-qualified them but they did not tender,” said Salhi.

“They said that was because of a very competitive market, because we have Asian, Turkish contractors or whatever, but we’re in a global market: we can’t say we’ll only open a tender to European companies.”

Qatar says that short-term delays will not derail its infrastructure programme, which will support the state’s economic development.

“A clear plan is in place in regard of the implementation of the major infrastructure projects,” Qatar’s government said in a statement to Reuters.

“The government is keen to avoid any bottlenecks that may arise while at the same time continuing to closely coordinate fiscal and monetary policies towards that end.”

Few markets can match the pace of Qatar’s economy, which is expanding by more than 6 percent annually, but disappointment that fast growth does not translate into quick profits is prompting some foreign companies to go elsewhere.

“Contractors poured into Qatar because they were blinded by the opportunity and too many are chasing revenue, even if that doesn’t lead to profit,” said the second construction source.

“Qatar is a very difficult environment for contractors – most are losing their shirt, so why stay in a market where everyone is losing money?”