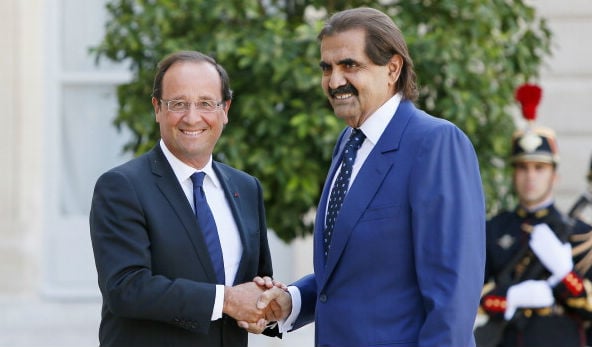 France’s Socialist government will let gas-rich Qatar invest millions of euros to foster business creation in depressed suburbs, a move critics say is an admission of defeat and grants far too much influence to the Gulf state.

Plans for a 50 million euro fund to stimulate economic activity in urban suburbs proved divisive when they were first floated last year, prompting former president Nicolas Sarkozy to put them on hold until after the May election.

Now President Francois Hollande’s government, under pressure to create jobs in suburbs where unemployment sometimes exceeds 40 percent, plans to unblock the funds thanks to a compromise it hopes will soothe concerns from both left- and right-wing critics.

A source close to Industry Minister Arnaud Montebourg said the plan was for the government and French companies to match or exceed Qatar’s investment of 50 million euros ($65 million), for a total of at least 100 million.

“Qatar is a friend to France. This will be a mixed Franco-Qatari fund; Qatar won’t have a majority,” the source said, adding that final details and a timetable still had to be worked out.

Business ties between France and Qatar have deepened in the past five years as the euro zone’s No. 2 economy has overcome instincts for economic patriotism, welcoming investment in areas from sports to real estate and infrastructure.

The suburban funds are to be aimed at providing financing for first-time entrepreneurs looking to set up businesses.

Meanwhile, left-wing commentators argued that France should be wary of signing deals with a monarchy that shares few of its ideas about democracy and could be seeking to buy influence due to France’s seat on the United Nations Security Council.

Kamel Hamza, a town hall adviser in the northern Parisian suburb of La Courneuve, said Qatar had agreed to make the investment after a group of 10 elected officials from minority backgrounds visited the Gulf state in November 2011.

“We were disappointed to hear the project had been sidelined,” he told Reuters. “We had entrepreneurs in the neighbourhood lining up with business plans, ready to go.”

“The fact that the government is matching the funds is good news – it puts a lot of the criticism to rest,” he added.