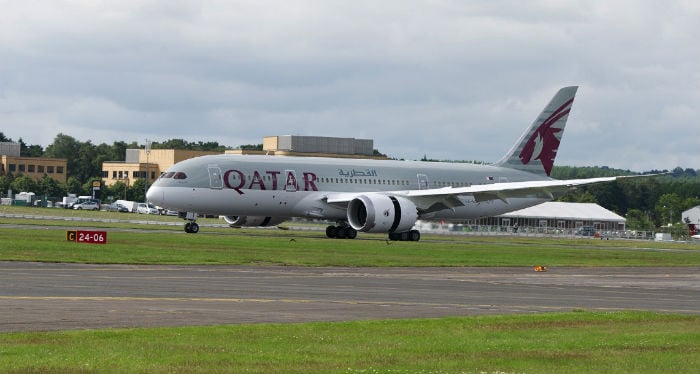 Qatar Airways has announced plans to launch its Boeing 787 Dreamliner on two Indian routes from September 01, 2013.

The carrier will operate the troubled jumbo jets to and from the Indian cities of Delhi and Bangalore, it revealed in a statement.

Qatar Airways has 254 seats across its 787 business and economy class cabins with specially designed interiors. The flights also offer wireless facilities for all the passengers on board.

India is one of the key markets for Qatar Airways and the airline currently offers 95 passenger flights non-stop each week from 12 gateway cities to Doha including Mumbai, Ahmedabad, Amritsar, Goa, Hyderabad, Kolkata, Kozhikode, Trivandrum, Chennai, Bangalore, Cochin and Delhi.

Qatar Airways, the first Middle Eastern airline to operate the Boeing 787 Dreamliner, was forced to ground one of its 787 planes last month following a technical glitch.

Earlier this year, Al Baker also blamed aircraft manufacturer Boeing of curtailing its 2013 expansion plans after all the Dreamliners in operation were grounded for three months following battery problems.

“It is impacting my bottom line because we are expanding. We are planning 15 new routes this year and now I will have to settle for only ten. I’m very unhappy,” he said in May.

The airline has presently taken delivery of eight of its 60 Dreamliners on order and has been flying the aircraft from Doha to Dubai, London, Munich, Stockholm, Riyadh, Jeddah, Zurich and Frankfurt. The Qatari carrier will also be flying the Dreamliner to Oslo and Copenhagen from September.