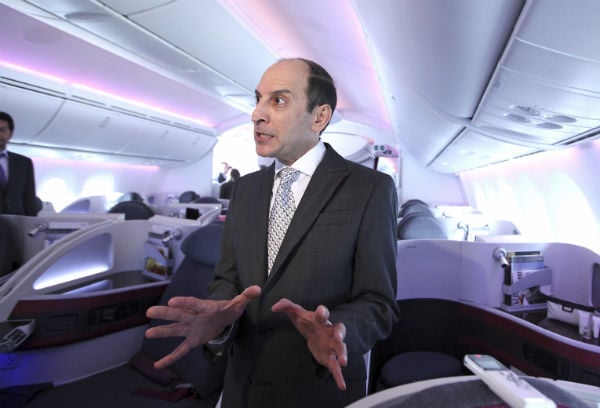 Qatar Airways’ chief executive played down safety concerns over Boeing’s new 787 Dreamliner aircraft on Wednesday, dismissing a series of recent incidents involving the plane as “teething problems” and saying he had no plans to cancel orders.

“Of course there will be teething problems from time to time, but this is foreseen with any new aircraft programme,” Akbar al-Baker told reporters at an event in Doha on Wednesday.

Qatar Airways is the largest customer of the Dreamliner in the Middle East with an order for up to 60 of the aircraft – 30 firm orders plus an option on acquiring 30 more. It currently has a fleet of five 787 jets.

“Since the first issues we had with our newly-delivered airplanes, we’ve had no other technical issues with the fleet of five Dreamliners we are operating now,” he added.

Japan’s All Nippon Airways Co cancelled a Dreamliner flight scheduled to fly from Yamaguchi prefecture in western Japan to Tokyo on Wednesday due to brake problems.

This came just a day after a fuel leak forced a 787 operated by Japan Airlines to cancel its take-off at Boston’s Logan International Airport. An electrical fire on another 787 forced cancellation of a JAL flight to Boston from Tokyo.

Qatar Airways’ outspoken chief executive supported the U.S. planemaker and said the incidents at Logan may have been isolated.

“It could be a production issue with one of the components which caused the smoke. I’m sure if it was something serious, the FAA would have grounded airplanes. This was not the case, so it could be that this was an isolated issue.”

Baker said he had no plans at the moment to cancel any plane orders with Boeing.

“When we have to start grounding planes, then it becomes an issue and then they (Boeing) have to get their cheque book out,” Baker said.

Baker had earlier said that he would demand compensation from Boeing for grounding aircraft.

SCROLL DOWN FOR VIDEO

Click here to read about the latest problems to hit the Boeing 787.