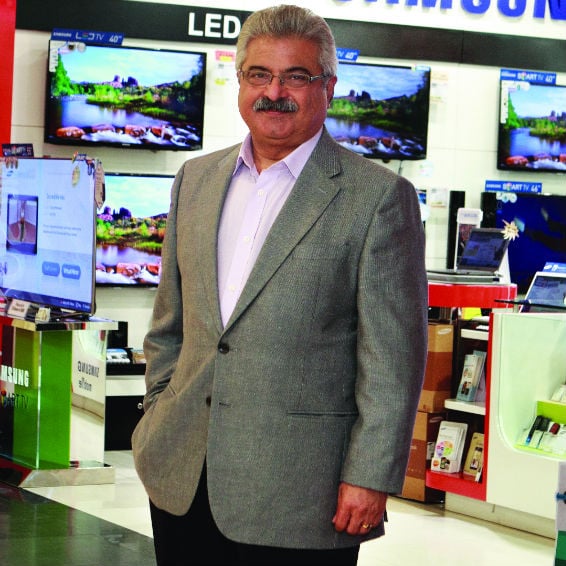 Interestingly, the casual entry of the CEO of Eros into the store goes seemingly unnoticed by his team of energetic salespeople. They continue to showcase their products to the crowd of shoppers in the same manner as earlier.

After we stroll through the showroom and exit, Babani smilingly reveals that he constantly monitors the quality of service rendered by the store staff across all the Eros outlets.

“Sometimes I just walk in and speak to random shoppers about their experience in the store,” he says. “In our showroom, no one can over-promise. We take a lot of corrective action,” he assures me.

Babani attempts to visit the company’s showrooms at least once a month, but admits that it’s becoming increasingly difficult to do the rounds as often as he would like, mainly because of office responsibilities.

It is easy to understand why the CEO is occupied: the company has been steadily expanding, posting a growth rate of 42 per cent in 2009 and between 35-37 per cent in 2010. The firm made a turnover of Dhs2.7 billion in 2011, and this year the company hopes to cross the Dhs3 billion mark.

Despite his busy schedule, the electronics industry veteran is happy to spare some time to chat at a nearby café about his long journey with Eros.

Babani joined the company in 1981, long before the invention of mobile phones and flat screen TVs. Eros then had the distribution rights for Japanese brand Hitachi in the UAE, which was not very popular at the time.

Taking advantage of Hitachi’s strong technology, Babani mapped out an aggressive marketing strategy for the erstwhile VHS players, and in a year, sales almost tripled.

Since then, it has been a story of incessant growth. Going by his understanding of the consumer electronics industry, Babani attempted to tap into each of the gadget revolutions – from high-definition TVs and DVDs, to LEDs and smartphones. And along with Hitachi, Eros now also has the exclusive distribution rights to 12 other brands including Samsung, TCL, Linksys by Cisco, Candy, Flip, BenQ and Taurus.

Among those, one of the biggest success stories has been Korean brand Samsung.

“When Samsung was initially acquired by us, it was an underdog. In fact the entire telecom market was dominated by European brands. But we believed that on the hardware side, Samsung was very strong. They needed to work on the software, but if they did that correctly, we would be able to get somewhere.

“And in the last 10 years, Samsung has really grown. From our side, we have given them good marketing and logistics support – we have ensured that there are no backlogs,” Babani explains.

In fact, the Korean brand has become so popular that, according to Babani, it currently enjoys the largest market share – around 40 per cent – in the UAE’s smartphone market.

“In the total mobile phone market we are number two, with a share of 33 to 34 per cent. Nokia is still leading at 37-38 per cent, but I think we will bridge that gap,” says Babani. “We want to be by far the market leaders.”

Passionate about his job and the business, Babani’s mantra for success is very simple – learn the tricks of the trade. “It is essential to take timely decisions – even if you have to lose money. Sometimes the decision is to lose millions. But it’s all about saving the rest of the millions. If I lose $25 million now, I may still have $75 million. But if I keep that amount for a year, I may lose $75 million instead,” he says.

“It’s also important to be professional and hire the right people,” he adds.