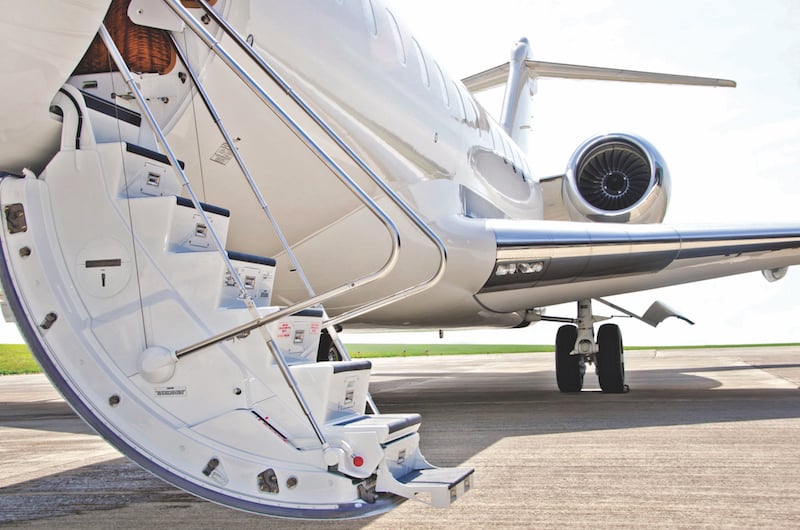 Large-volume commercial air carriers are haemorrhaging. The International Air Transport Association (IATA) has said that airlines globally are staring at a potential $314bn hit in ticket sales in 2020 alone as a result of the Covid-19 pandemic. The very idea of thousands of individuals congregating within an airport terminal, and then hundreds of them seated next to each other on a flight is, for the moment at least, an almost incomprehensible reality within the near to medium term.

But that isn’t the case with private jets which ferry passengers through dedicated terminals and then have a maximum of 6-12 passengers seated on an airplane. “Remarkably, over 70 per cent of the demand for private jets that we saw in the past few weeks came from first-time private jet travellers who used to fly first class on commercial airlines,” says Adel Mardini, founder and CEO of Jetex.

Jetex handles logistics, flight support requests and is also a leading operator of private jet terminals (or Fixed Base Operators (FBO) as they are referred to in the industry). Jetex, whose portfolio includes a sprawling 1,600-square-metre terminal located in Dubai South, says that flying private could reduce a customer’s exposure to a virus by more than 30 times compared to flying commercially.

That estimate, it says, is based on the number of people a client would come into contact with at less than the recommended six feet of social distancing during the entire process of flying private. “The current expectation is that it will take commercial airlines up to 18 months to restore travel to the previous levels of 2019. In the interim, many passengers who previously travelled in premium cabins will turn to private aviation for the safety and security it provides. The current main emphasis for flying privately is not the convenience and luxury, but more so the reduction of health risks,” adds Mardini.

Pre-pandemic estimates suggested that there are approximately 800 private jets registered in the Middle East and North Africa (MENA) region. “The UAE has around 145 registered private aircraft. There are many more aircraft that are based in the region, but are registered in Europe or someplace else. So, there are more than 1,500 private aircraft that actually operate in the MENA region,” Ali Ahmed Alnaqbi, founder and chairman of the Middle East and North Africa Business Aviation Association (MEBAA), told Gulf Business.

Alnaqbi, who also became the first Arab to be appointed as the chairman of the International Business Aviation Council last year, says that prior to the pandemic, the aviation sector as a whole in the UAE – including airports, commercial passenger operations, private jets and charter flights – contributed to 17-19 per cent of the GDP.

Private aviation accounted for about 3 per cent of that number. “There are more than 27 companies, including FBO, Maintenance, Repair and Overhaul (MRO) and charter companies, registered within the UAE itself. Some companies offer brokerage services and are not registered, so the actual number of companies may be even double that number. There are more than 7,000 employees in the private aviation sector in the UAE alone and over 50,000 employees in the MENA region.”

While private aviation has undoubtedly taken a hit with a near-complete grounding of all passenger operations around the world, the pandemic might in fact open new business avenues for the sector.

Austria-headquartered private business airline JetClass recently introduced a not-for-profit ‘Flightpooling’ service wherein if six people sign up for a private jet flight on a specific route via the airline’s website, they will be able to charter a flight to that destination and split the cost equally between them, with JetClass handling the booking.

“Right now, we’re doing this not for profit. But I believe wholeheartedly that moving forward, we will have a segment and a product that we’ll be offering consistently, post Covid, which is operating flights very much along the same lines – flightpooling – and I think a lot of the first-class and corporate travellers will pay a little bit more to go through a general aviation terminal for an entire experience that is a lot safer and quicker,” says Fahim Jalali, chief business officer at JetClass.

Here in the UAE, infrastructure has been put in place to support the private aviation sector. This includes the 6.7-square-kilometre Mohammed bin Rashid Aerospace Hub in Dubai South, which in addition to housing VIP FBOs, also offers maintenance and technical services specifically for the private aviation industry.

Still, Covid-19 has thrown the growth prospects of the sector into disarray. Alnaqbi, on behalf of approximately 270 MEBAA members, took the initiative of petitioning governments across the region for assistance to weather the pandemic.

“We have written letters to eight governments where business aviation is very active including the UAE, Saudi, Morocco, Egypt, Tunisia, Jordan and Bahrain. We sent these letters to the ministry of aviation, ministry of transport and also to the general aviation authorities in these countries. The main things that companies are asking for are waivers on office rents, addressing fees like parking and landing fees, and also the finance element where they are looking to restructure the loans they’ve taken,” adds Alnaqbi.

The Dubai South Free Zone, where several private jet companies are located, announced an economic stimulus package in May that offered incentives such as easy instalment schemes as well as waivers of penalties on late renewals, and cancellations of contracts and licences. “Authorities of the United Arab Emirates continue to be very supportive of the private aviation sector as they understand the value it delivers to the tourism industry and the economy at large. The incentive programmes launched by Dubai South will be extremely helpful in providing support to our industry,” says Jetex’s Mardini.

Alnaqbi meanwhile says support for private aviation is necessary as it not only serves the luxury industry, but also fulfils other critical roles. “When a crisis occurs, we can transfer goods and food to areas where larger airlines cannot reach. At MEBAA, we even partnered with the World Food Programme and have a contract with them called Fly and Feed where we contribute towards supporting the fight against hunger. Business aviation is not only a luxury, but it’s also a humanitarian tool.”

As to how scarred the industry will be once this pandemic is over, Alnaqbi is optimistic. “I have no doubt that we will bounce back very strongly. Business aviation and private aviation are very flexible. I am telling companies to minimise costs and expenditures as far as possible. My message to them for the moment is: Hang on.”