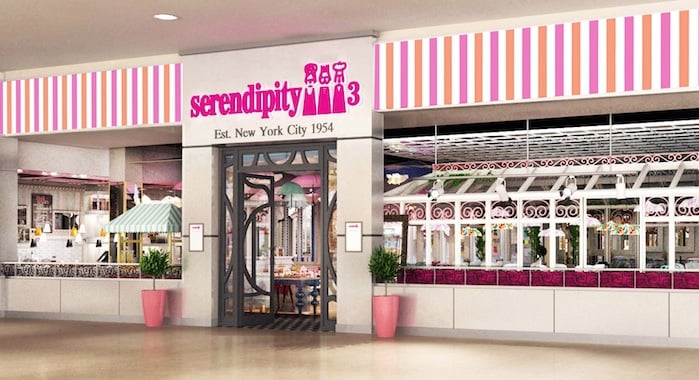 The outlets will be opened at Dubai Festival City and The City Walk in December 2015, a statement said.

Founded more than 60 years ago in New York, Serendipity 3 is frequented by celebrity patrons and is famous for its desserts such as the Frrrozen Hot Chocolate, sundaes, pies, cakes and floats.

The company even bagged a Guinness world record some years ago for the most expensive dessert – the Golden Opulence Sundae – which was covered in 24-carat gold and had a price tag of $1000.

The outlets in Dubai will be the first Serendipity 3 restaurants outside the United States and are part of an exclusive license with the Al Tayer Group covering all of the Gulf Cooperation Council countries.

Serendipity 3 founder Stephen Bruce said: “This is an exciting chapter for Serendipity 3, to be launching our first overseas venture, in the Middle East. Serendipity 3 is an expression of Calvin [Holt], Patch [Caradine], and myself and has been an iconic New York City landmark for over 60 years.

“We hope that our outlets at Dubai Festival City and City Walk will also become landmark destinations.”

The outlets in Dubai have been designed by international consultancy Harrison in consultation with Al Tayer Group, with the décor in both locations resembling a theatrical stage set.

Colourful interiors will feature variegated furniture, Tiffany lamp shades dropping down from the ceiling and wall art pieces suggestive of the early days of the restaurant and the journey of the three founders.

The terrace reflects a similar design with added iron open cages to host smaller groups. The store-front displays the logo with the three princes, created by Milton Glaser and Seymour Chwast in the 1960s.

Serendipity 3 will offer guests in Dubai the same “whimsical” menu with desserts and savory items such as foot-long hot dogs, pastas, burgers, sandwiches and breakfast options, the statement added.

Al Tayer Group was represented in the deal by Marvin Traub Associates.

The United Arab Emirates has become a hub for international food and beverage brands with the country’s hospitality sector reporting record growth. A growing and relatively young population, high levels of affluence and increasing tourism are all boosting the industry.

Last week, Dairy Queen, an American fast food chain backed by billionaire Warren Buffet, revealed plans to open over 20 outlets across the UAE by the end of 2019.