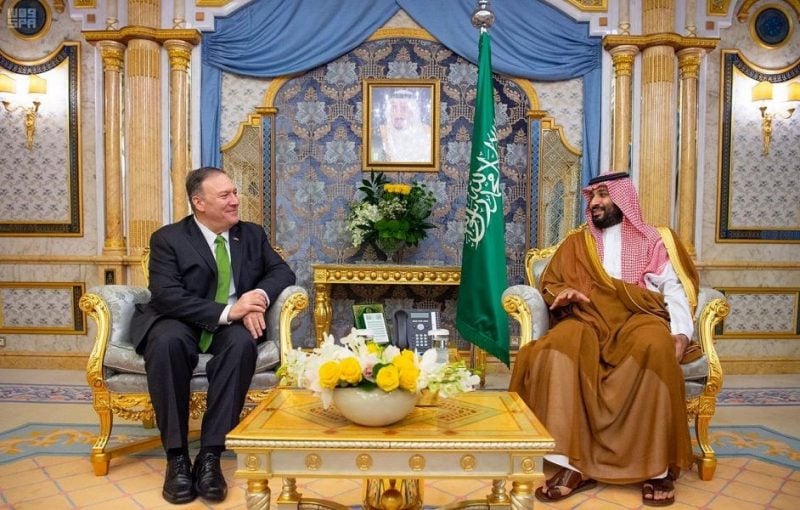 US President Donald Trump said he wants tougher US sanctions on Iran as his top diplomat arrived in Saudi Arabia to consult with leaders and build a case against Tehran following weekend attacks on the kingdom’s key oil facilities.

“We’ll be adding some very significant sanctions,” Trump said Wednesday in Los Angeles. The administration will announce the new penalties in the next 48 hours, he added.

Pompeo met with Saudi Crown Prince Mohammed bin Salman and “discussed the need for the international community to come together to counter the continued threat of the Iranian regime and agreed that the Iranian regime must be held accountable for its continued aggressive, reckless, and threatening behavior,” State Department spokeswoman Morgan Ortagus said in a statement.

The two men, Ortagus said, also “agreed that this was an unacceptable and unprecedented attack that not only threatened Saudi Arabian national security, but also endangered the lives of all the American citizens living and working in Saudi Arabia, as well as the world’s energy supply in general.”

Pompeo told reporters earlier that the US believes with “high confidence” that Iran was behind the strikes on Saudi Aramco facilities, regardless of whether they originated in Iranian territory. The attack was initially claimed by Houthi rebels in Yemen.

“It’s not the case that you can subcontract out the devastation of 5 per cent of the world’s oil supply,” Pompeo told reporters. He said his goal during the trip to Saudi Arabia and United Arab Emirates was to “build out a coalition to develop a plan to deter” Iran.

Trump on Wednesday signaled reluctance to engage in a military operation that could lead to a prolonged conflict.

“It’s very easy to attack,” he said, but added: “How did going into Iraq work out?”

The President also warned that he has “plenty of time to do some dastardly things” to Iran in response to the strikes on the Aramco facilities.

Earlier in the day, Saudi Arabia’s defense ministry said the attacks were “unquestionably sponsored by Iran,” adding that an assessment of the parts of drones and missiles recovered indicate Iranian origin. The ministry displayed pieces of what it said was the weaponry involved.

“We were blessed that there were no Americans killed in this attack, but any time you have an act of war of this nature there’s always a risk that could happen,” Pompeo said in Jeddah.

Iran has denied involvement in the attacks, which were claimed by the Yemeni rebels allied with the Islamic Republic. Saudi defense officials, however, said the strikes came from the north, though they didn’t directly say they originated on Iranian territory, a nuance echoed by Pompeo.

Trump has heightened sanctions on the Islamic Republic since quitting the 2015 nuclear deal with Iran, including adding severe restrictions on the country’s oil sales. Additional U.S. economic sanctions could be a route to avoiding direct military conflict. While Trump initially said the U.S. was “locked and loaded” to respond to the Aramco attack, he has since signaled that he isn’t eager for another Middle East conflict.

Possible targets for additional sanctions include people and entities conducting procurement or smuggling on behalf of Iran’s Revolutionary Guards Corp and additional Iranian banks, one U.S. official said. The impact of additional banking sanctions may be low because few companies do business with them now, the official said.

A second official said that the Treasury Department was working around the clock on the matter. One possibility for additional sanctions is Iran’s central bank, the second official said — but added that it’s an unlikely target as it would hamper humanitarian aid to the country.

Iran’s economy has already been under severe pressure from existing sanctions, yet some analysts said there are still a number of potential targets for restrictions, including in the construction sector, additional companies on the Tehran stock exchange and foundations controlled by the regime or IRGC. But with the vast majority of Iran’s economy dependent on oil sales, additional sanctions may have little more than a marginal effect.

I have just instructed the Secretary of the Treasury to substantially increase Sanctions on the country of Iran!

I have just instructed the Secretary of the Treasury to substantially increase Sanctions on the country of Iran!

Soon after the strikes took place, Pompeo quickly blamed Tehran. The attacks crippled oil output from the world’s biggest exporter, but the international response has so far been more measured. The United Nations said it is sending a team of inspectors to investigate the incident.

Hardliners on U.S. policy toward Iran warned the president that a sanctions-only approach may embolden the regime, especially after a spate of attacks on tankers in the Persian Gulf and the shooting down of an American drone over the region’s waters earlier this year.

“U.S. presidents who are unwilling to use all instruments of national power always default to sanctions,” said Mark Dubowitz, the chief executive of the Foundation for Defense of Democracies and a prime architect of U.S. sanctions against Iran. “While the administration can cause even more severe pain economically for the regime, Tehran will interpret this as a sign of American weakness, not strength.”

Trump rebuked an ally, Republican Senator Lindsey Graham of South Carolina, on Twitter on Tuesday after Graham suggested that Iran interpreted Trump’s reluctance to retaliate earlier this year for the downing of a U.S. drone as weakness.

No Lindsey, it was a sign of strength that some people just don’t understand! https://t.co/EU8AvfH7j9

The strikes on Saudi Arabia have diminished expectations that Trump and Iranian President Hassan Rouhani could meet on the sidelines of the UN General Assembly next week in New York.