Pizza wars in the UAE: The lowdown - Gulf Business 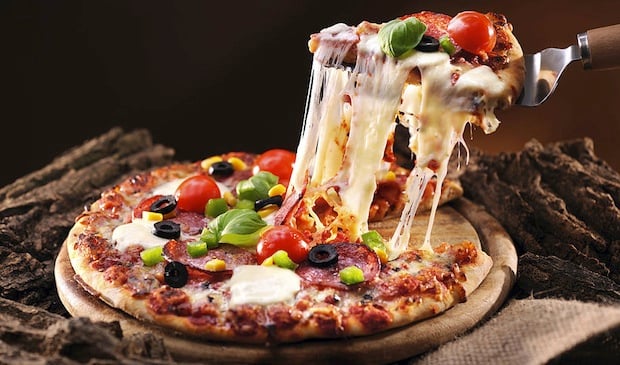 There are almost 870 pizza outlets in Dubai alone, according to a quick search on website Zomato (including delivery, dine-out and cafes). With new places opening up every other day – thanks to Dubai’s booming food and beverage market – customers have a wide variety of options to choose from.

However, with many of them franchised, the market has seen disputes arising between partners who split, leaving many customers confused.

Most recently, customers of Pitfire Pizza received a message on their phones stating that the outlet had moved from The Greens to Jumeirah Lake Towers.

The confusion is because of a split in management, with both now open in the market.

We spoke to both the companies to understand what exactly happened. Here’s what they had to say –

Pitfire Pizza (now at JLT): Owners Bill and Michelle Johnson developed the Pitfire concept over a four-year period and in late 2013, signed a franchise agreement with the current owners of P Fire Pizza (and erstwhile II Taglio restaurant) to set up the Pitfire Pizza Café in The Greens.

As part of the deal, the Johnsons invested over Dhs600,000 into the business, to renovate the store, bring in staff and market the brand.

According to Bill Johnson, the outlet, which was losing money as II Taglio, broke even within a few months of starting operations as Pitfire in 2014.

However, just over a year later, around May/June of 2015, he and his wife were cut-off from the restaurant and operations. Johnson claims he was not given any explanation for the move. In the meantime, he also found out that the company had changed its trade licence name from II Taglio to Pitfire – without his knowledge or consent.

Johnson had started the process of trademarking the Pitfire brand and logo in 2013 (before entering the partnership), but discovered in 2015 that it was registered under the wrong category and hence reapplied for the same. He received certification in December 2015 and very recently opened a new outlet in JLT. 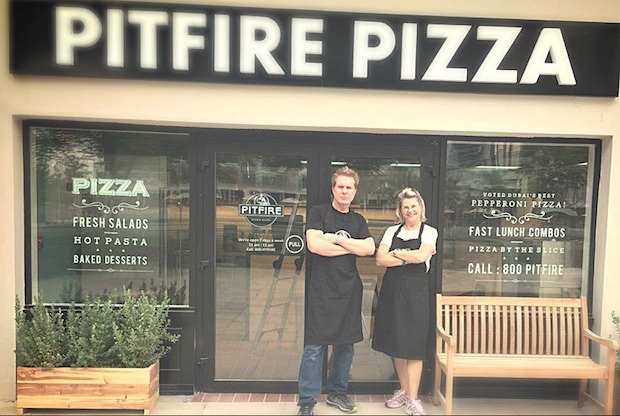 However, he alleges that the outlet in The Greens has continued with his concept and menu and also that he has not been paid his dues.

He lodged a case with the Dubai Department of Economic Department (DED) for IP infringement – which he won – and had the outlet in The Greens change its name and logo. He has also gained custody of the social media accounts for the Pitfire brand. He is currently pursuing another case in court.

P Fire Pizza Café (The Greens): After losing the franchise to Pitfire Pizza (officers from DED asked them to close the place or change the name) the owners decided to rebrand overnight to P Fire Café, according to operations manager Bryan McCallum. 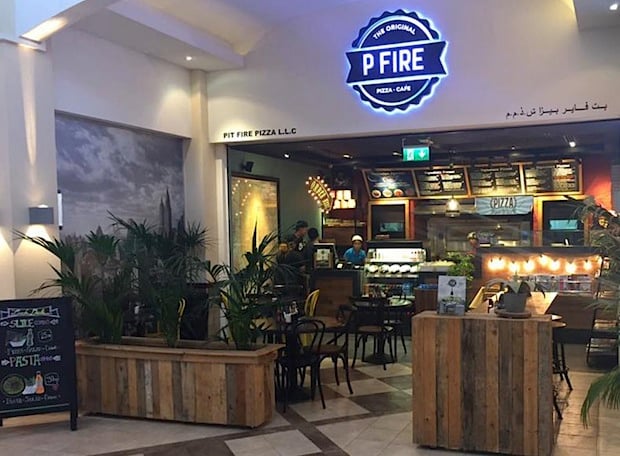 Speaking on behalf of the owners, he claims the Johnsons had trademarked the Pitfire name and logo behind their backs and that they were unaware of it.

McCallum, who was hired by Bill Johnson, also alleges that the Johnsons were asked to leave because they had not done an “efficient job” with the store.

This is not the first time a pizza company has faced a franchising issue in the UAE.

Although the brand and logo are markedly different, the menu is quite similar (not the names).

However, the menu is constantly changing to differentiate the brand, says Ian Ohan, founder and CEO of Freedom Pizza.

“We were never satisfied with many of the lower quality ingredients prescribed to us from our past and have vastly improved the quality, taste and integrity of all of our ingredients across the board.”

“Menus, like companies should never be static – they must evolve,” he adds.

NKD Pizza, which has re-launched this year, is using the original menu developed by the company’s creators in the US, states Miles Burn, Sales and Marketing manager at NKD.

According to him, there are always going to be issues when a franchisee splits from the franchisor.

“It’s important to note that no two places will have same menus and menu items, as franchisors usually have patented and registered their product. That allows no one else to use their items,” he explains.

“And also to confirm, consumers are able to differentiate between products and understand what is more convenient to their taste.”

For now, with the market growing, all the players seem to be sustaining. However, it is certainly not an easy market to compete in.

The target demographic in Dubai of people who eat high-end pizzas is around 500,000 to 600,000 people at best, according to Johnson.

“The audience for a brand like Pitfire is really quite small. That’s a challenge of being a restaurant here – that’s the reality of it,” he says.