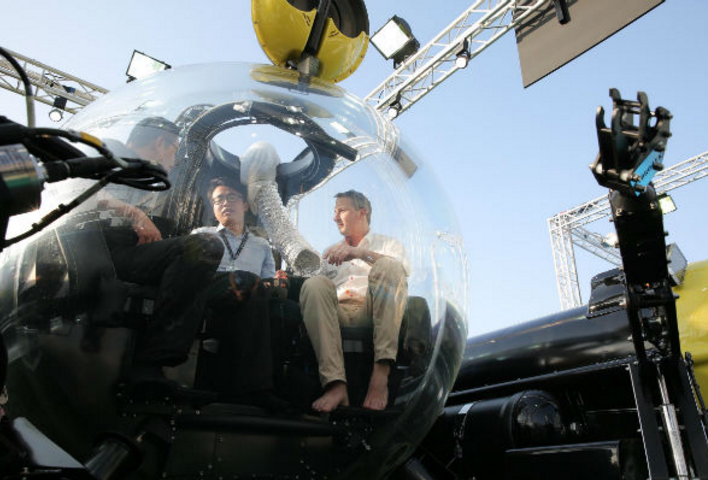 Some of the more exotic additions to the Dubai International Boat Show lineup this year are the U-Boat Worx C-Explorer 3 and Friday Personal Submarine.

The compact passenger-carrying submersibles have a maximum depth of 300 metres, 16 times deeper than than 18 metre limit for most recreational diving qualifications.

“There are lots of things to explore that are too deep for SCUBA diving,” said U-Boat Worx Roy de Boer.

“Most shipwrecks that you can dive have been prepared, and lots of divers have already been there. With a sub, you can find shipwrecks that have never been seen since the day they sank – you can be the first there.”

Friday is a spin-off from the Univeristy of Coimbra in Portugal. It uses an acrylic globe to offer an unrestricted view of the surrounding sealife and is small enough to fit on a yacht.

The craft is propelled via electric motor and uses similar controls to aerial drones.

“We developed the submarine to use in our own research, aiming to dive up to 300 metres with a mission of eight hours duration,” said Friday CEO Fernando Seabra Santos. “It was an intellectual challenge for a group of researchers, and aims to be the smallest, lightest, and also the most affordable of its kind.”

The Quadrafoil 2QA is powered by a 3.7 kilowatt electric outboard motor and has two seats. It resembles a jet ski with the addition of retractable hydrofoils which lift the craft out of the water and reduce drag, allowing a top speed of 40kmh.