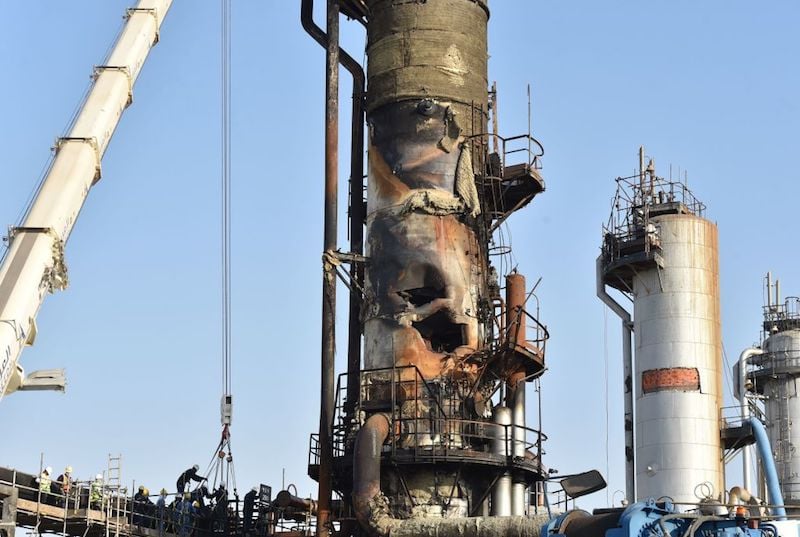 Saudi Aramco revealed the significant damage caused by aerial strikes on its Khurais oil field and Abqaiq crude-processing plant last weekend, and insisted that the sites will be back to pre-attack output levels by the end of the month.

Aramco took reporters for a first look inside the facilities, where equipment was scorched and ruptured by the assault on Saturday. In one area lay a pile of debris — a mess of oil melted to asphalt, twisted and charred metal grates, and pieces of fire hose — that stank of tar. While officials promised the plants would be repaired quickly, they also said they were still in the process of evaluating whether some equipment could be fixed or would have to be completely replaced.

The Khurais field and processing plant resumed 30 per cent of production within 24 hours of the strike and will produce 1.2 million barrels a day by the end of September, Fahad Al Abdulkareem, general manager for Aramco’s southern area oil operations, said at a briefing on Friday. Workers are there 24 hours a day to speed the repairs, but the site showed significant damage.

The Khurais field has a maximum output capacity of 1.45 million barrels a day and processes all of its oil on site, according to Al Abdulkareem. The assault affected four of its crude-stabilisation units — 90-meter towers that reduce pressure and remove gas from the crude. One of the columns shown to reporters was a charred wreck, and at least one other was even more badly damaged, he said.

Aramco also showed reporters pipes that had been pierced by fragments from the missiles, causing them to spew oil, feeding the fires. Workers were busy replacing segments of piping and insulation at the facilities, and conducting tests on the damaged crude-stabilisation columns.

The world’s biggest crude exporter has vowed a swift restoration of output at Khurais and Abqaiq after the attack by drones and missiles disabled 5 per cent of global supply. There’s concern in the market about how long it will take the kingdom to fully restore lost production as it depletes inventories to meet supply commitments and operates without its usual buffer of spare capacity.

Saudi and U.S. officials have said that the drones and missiles used in the attack were made by Iran, though Tehran has denied involvement. The incident has ratcheted up instability in the world’s most important oil-producing region, where tensions were already high following several attacks on Saudi oil tankers and pipelines in recent months.

The tour of the Abqaiq plant, which processes crude oil from fields including Ghawar, the kingdom’s largest, also showed extensive damages. The smell of natural gas and other hydrocarbons hung over some areas of the facility. A huge sheet of twisted metal that had been struck by missiles was laid out next to a damaged tank for reporters.

The attacks seemed to target with high precision key equipment at both sites, shutting the plants completely even though majority of the facilities were untouched.

Abqaiq was struck 18 times, with five hits on crude-stabilisation towers and 11 on spheroids, which separate natural gas from oil, said Khaled Al Buraik, Aramco’s vice president for southern-area oil production. At least three of the towers showed heavy damage, including large holes surrounded by scorching. Some of them may need to be replaced, he said.

Large holes were visible on the tops of rounded tanks called “spheroids,” which had been surrounded with scaffolding as lines of workers went up and down, evaluating whether they could be fixed, or would have to be replaced.

Abqaiq’s throughput before the attack was about 4.9 million barrels a day, and on Tuesday Aramco CEO Amin Nasser said it was processing about 2 million a day. It should return to pre-attack levels by the end of September, he said.

Aramco has ramped up output at its offshore fields — making more of its heavier crude grades available to customers — and is also tapping oil in storage to meet export commitments. A return to the company’s full 12 million-barrel-a-day capacity is unlikely before the end of November, Prince Abdulaziz bin Salman, the energy minister, said Tuesday.