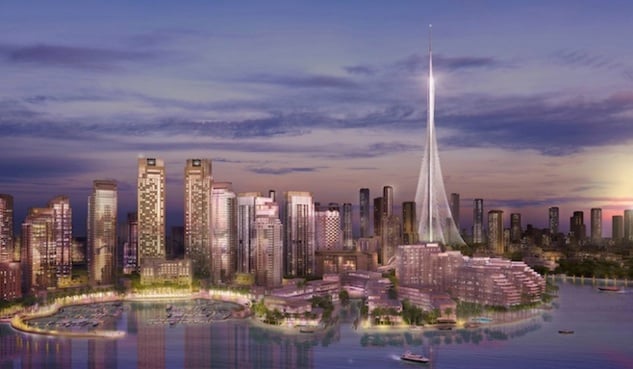 Dubai will soon host a tower a ‘notch taller’ than the Burj Khalifa, developer Emaar Properties revealed on Sunday as it unveiled details about its latest project at Dubai Creek Harbour.

Called The Tower, the $1bn mixed-use building will form the centerpiece of the 6 sq km master-development, located close to Ras Al Khor.

The winning concept by Spanish/Swiss neo-futuristic architect and painter Santiago Calatrava Valls will see the tower shaped like a lily with the image of a minaret borrowed from Islamic culture.

The observation decks at the top of the tower will be shaped to resemble an elongated oval-shaped bud with geometric texture. The Pinnacle Room specifically will offer 360-degree views of the sky while the VIP Observation Garden Decks will be designed around the theme of the ‘Hanging Gardens of Babylon.’

The tower will also have a boutique hotel for visitors.

It is slated for completion by 2020, Emaar chairman Mohamed Alabbar confirmed.

“The ground mobilising has already started and we expect the piling works to begin in June or July,” he told reporters.

In terms of financing, he said the project will be funded 50-50 by equity and debt. “It will be based on our internal revenue model.”

Alabbar refused to reveal the exact height of the tower and also would not confirm whether it would surpass the Saudi Kingdom Tower, which is aiming to be the world’s tallest tower when it opens.

“We want it to become a symbol for Dubai and the UAE just like how the Eiffel Tower represents Paris,” he said.

“The Tower in Dubai Creek Harbour is our tribute to the positivity, energy and optimism that Dubai and the UAE celebrate. It will be the destination for the world to visit, enjoy and celebrate life, as Dubai prepares to host the Expo 2020.

“It will also position Dubai Creek Harbour as one of the most desired residential, leisure and touristic attractions.”

The wider Creek Harbour development will also feature a massive new retail district which will be directly connected to the tower. Further details about this will be revealed in a few months.

Alabbar also stressed that all the required safety and security requirements would be met by the new towering structure. It will made with cable technology with cladding done with stainless steel and glass.

Santiago Calatrava Valls said: “From the beginning, my team and I have tried to put the best of ourselves into this project, since it is very special and is a great honour to participate. The design has clear reference to the classic art from the past and the culture of the place while serving as a great technological achievement.

“It is a symbol of an abiding belief in progress and in hope,” he added.