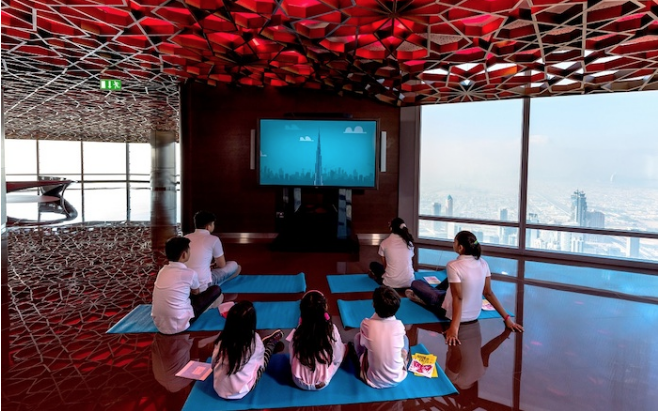 To be held at the observation deck ‘At the Top’, the 360 degrees of learning programme for school children is designed to educate them about the iconic building.

School groups can choose between a standard visit to At the Top in level 124 or can also opt to choose a special classroom on level 125.

As part of the programme, children will watch a documentary film on Dubai’s heritage and the story behind the inspiration and construction of Burj Khalifa.

Once the film concludes, children can test their knowledge about the building with a series of interactive team challenges.

A set of age specific work sheets have also been created that can be used by schools after the visit for projects and follow-up work, a statement said.

Unveiled in 2009, Burj Khalifa was recently voted as the ‘best tourist attraction’ in the world for 2015 in an international poll.

The tower’s At the Top surpassed Disney World’s Magic Kingdom and the United Kingdom’s London Eye in a list created by online ticket sales site Attractiontix.

Quick facts about the Burj Khalifa

* The building holds four Guinness world records for the tallest building, the tallest man-made structure on land, the highest observation deck for At the Top and highest restaurant for At.mosphere

* There are 57 elevators within the tower, with the fastest one travelling at a speed of 10 metres per second