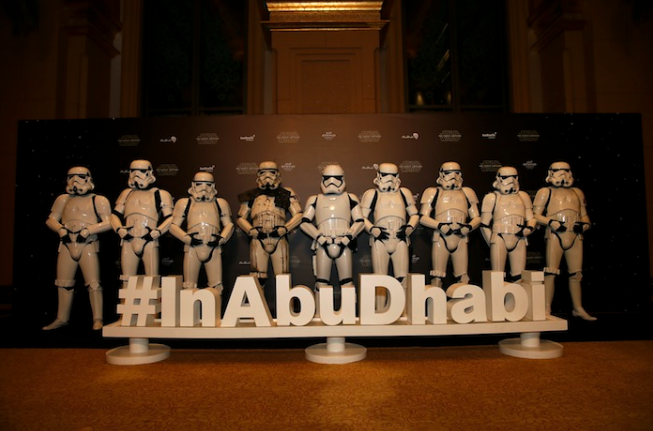 The Middle East premiere of the highly anticipated Star Wars: The Force Awakens took place in Abu Dhabi on Wednesday ahead of the movie’s official release on December 17 in the United Arab Emirates.

Held at Emirates Palace, the invitation-only red carpet event featured Stormtroopers from the UAE and United Kingdom, German garrisons of 501st Legion and members of the Jedi order.

The screening of the film was followed by a one-off ‘Jakku experience’ which featured the set piece of the Jakku market place, models of the Jakku speeder truck and the Jakku landspeeder, and the AT-AT foot.

Star Wars: The Force Awakens, the seventh instalment in the franchise, was partly filmed in the UAE capital during May 2014 with over 650 crew working across two locations. In the film, Abu Dhabi plays Jakku, a frontier desert planet in a remote section of the Outer Rim Territories.

Speaking at the premiere, chief executive officer of Abu Dhabi’s media arm twofour54 Noura Al Kaabi said: “Over a timeframe of almost 40 years, Star Wars has travelled far and wide to create a spectacular cinematic experience for audiences around the world and this time around, the film was facilitated by twofour54 and Abu Dhabi Film Commission.

“This is a step in the journey of Abu Dhabi’s film industry, as part of its quest to become one of the world’s most sought after production sites.”

This rebate also applies to airfares booked on Etihad Airways and accommodation.

Chair of Abu Dhabi Tourism & Culture Authority Mohamed Khalifa Al Mubarak said: “Abu Dhabi is well set to harness the power of film as a motivational and destination image-making tool. Star Wars: The Force Awakens has gifted us an exciting opportunity to associate the emirate with a global movie franchise which enables us to entice enthusiastic fans or audience members to visit inspired by what they have seen on screen.

“Film tourism allows us to connect the attractiveness of Abu Dhabi’s landscapes, culture and heritage, visitor experiences and resorts with new audiences and raise awareness of the destination to the millions of tourists who choose their destination primarily by the movies or TV programmes they’ve seen.

“We hope international travellers are encouraged to see for themselves where the film was shot and discover the beauty of Liwa desert, and stay on to explore the diversity of the emirate’s world-class attractions,” he added.