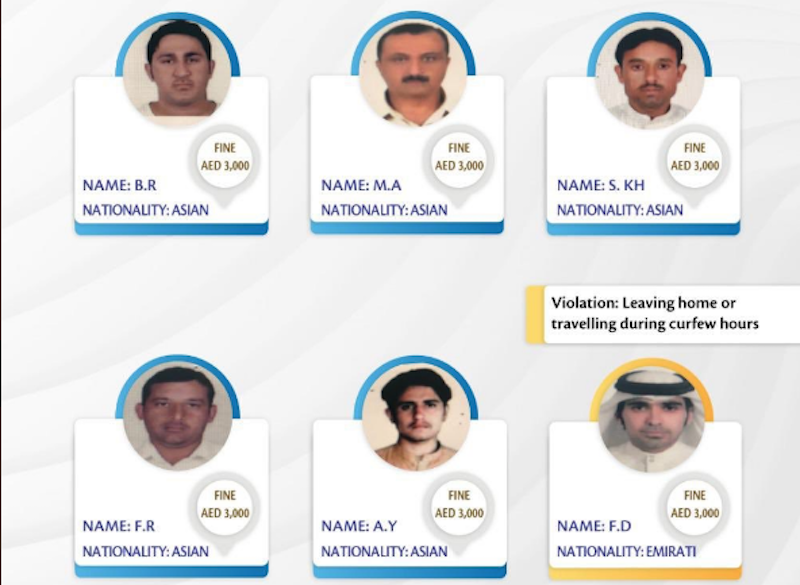 Salem Al Zaabi, the acting director of the Federal Emergency, Crisis and Disasters Prosecution said on Wednesday that despite frequent reminders, violations of the Covid-19 precautionary measures outlined by the government continue to occur.

He warned that the consequences of this could lead to a “tightening of restrictions” in the UAE.

In line with a decision by the State Attorney General, the UAE Public Prosecution department also published the photographs of those who were found not to be wearing their masks while in private vehicles, others who exited their homes during curfew hours, people who ignored the ban on gatherings and private parties, and even those who violated the restrictions set out by the government to prevent the spread of the virus.

Names & photos of the violators of the updated list of fines and penalties, which were revealed during of the UAE Government COVID-19 Media Briefing held on Wednesday 1/7/2020#PublicProsecution#UAE@UAE_PP pic.twitter.com/mNvvMj4VFC

The photos published were of various nationals including Asians, Emiratis and Arabs.

The fines ranged from Dhs2,000 up to Dhs10,000, the latter of which was issued to an Arab woman who violated the rule on the restrictions of gatherings.

“We call upon the public, citizens and residents, to adhere to the procedures, and we confirm that the concerned authorities in the state are keen to achieve a balance between the gradual return of activity and the adoption of precautionary and preventive measures in an effort to preserve the lives of citizens and residents, so that everyone is responsible,” said Al Zaabi.

Earlier this week, the UAE said that fines would be doubled for those found to be repeating a violation.

Third time offenders will be subject to legal action and could face imprisonment for a period of up to six months and an increased fine of Dhs100,000 too.