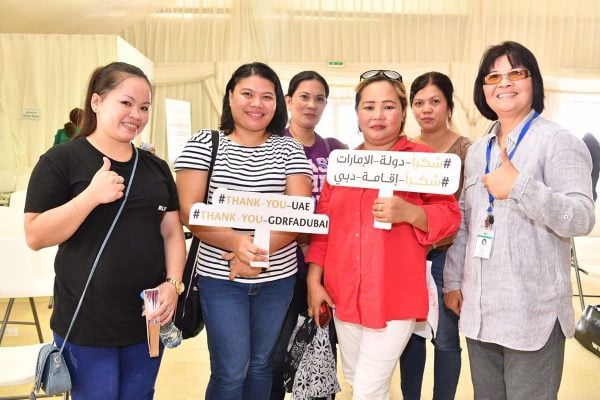 Illegal Filipino residents who apply to leave the UAE during the current amnesty period will receive a payment from the Philippine government, according to reports.

Gulf News cited Philippine consul general Paul Raymund Cortes as confirming the Dhs367 ($100) payment on Monday regardless of whether applicants are members of the Overseas Workers Welfare Administration (OWWA).

Furthermore, OWWA members will be entitled to an additional livelihood assistance amounting to Dhs1,500 ($375).

In both cases Filipinos will receive the funds after returning to their home country, the official was quoted as saying.

“The welfare assistance is a humble amount that the Philippine government had allocated to our returning nationals who have availed of the amnesty programme,” he said, according to the publication.

“We hope that this could provide some sort of a buffer to put a smile on their faces as they return home and be reunited with their families and start a new life in the Philippines.”

The Philippine government is arranging for a mass repatriation of amnesty seekers on August 15 with 98 Filipinos scheduled to fly home, he added.

At the start of August, when the amnesty began, the Philipine Department of Foreign Affairs said there were about 10,000 nationals in Abu Dhabi and 20,000 in Dubai eligible under the programme.

A total of 10,7000 people applied for the UAE amnesty in its first week.

The three-month period, from August 1 to October 31, allows those staying in the country illegally to leave without paying fines

For the first time, visa violators and absconders are also able to move to another employer or a new jobseekers visa category without having to leave the country.

People in these categories that choose to leave the UAE during the period will be exempt from fines and fees and won’t receive a no entry stamp.

Those that entered the UAE illegally have the opportunity to leave the country and only receive a two-year ban before they can return.

Applications are being accepted at nine centres across the country.