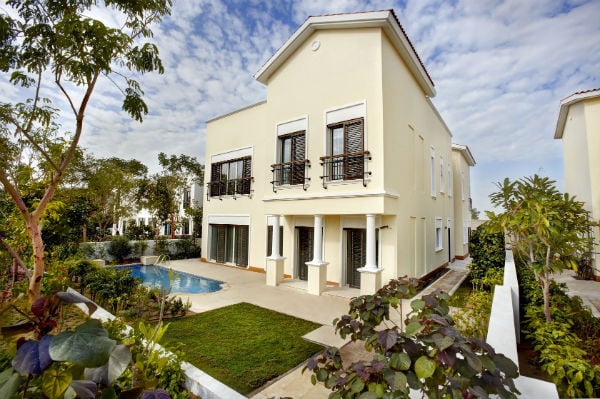 The first phase of the District One project within the Mohammed bin Rashid City development in Dubai is on track to be completed by mid-2016, its developer has confirmed.

District One project, which is being developed through a joint venture between government-owned Meydan and private developer Sobha, is a Dhs25 billion mixed-use development consisting of the world’s largest man-made lagoon and luxury residential units.

The developer said that it has sold out all its villa units in the first phase while the second phase too is nearly sold out.

In a project update, the company said that it has completed 90 per cent of foundations of all villas in phase one.

Work on vertical structures as well as infrastructure, including an 8.8km bicycle and jogging track, are also progressing rapidly.

Currently there are more than 4,000 workers on site but the numbers are expected to reach more than 7,000 workers in a few months, the statement said.

“With construction hitting targets for both phase one and phase two we are looking forward to another successful year ahead as we gear up for delivery of Phase I starting in mid-2016,” said Mohammed Ahmed bin Abdulaziz Al Shehhi, board member of Meydan Sobha.

District One project will also have a shopping and dining promenade, a community centre, an international school and a children’s nursery along with mosques.

The development was one of the many projects launched to capitalise on the Dubai real estate market’s recovery in 2013.

However, the market has stabilised in the last two years with property prices cooling as a result of government measures such as a mortgage cap and higher transaction fees.

According to a recent report by property firm Cluttons, house prices slipped 0.8 per cent in the first quarter, leaving average prices 0.5 per cent lower than a year earlier and 19.4 per cent below the 2008 peak.

The report also described the sector’s 2015 outlook as “somewhat mute” as it predicted a stable demand for houses in the medium to long term in the emirate.

But the report ruled out any possibility of an oversupply since Dubai’s population is also expected to grow.