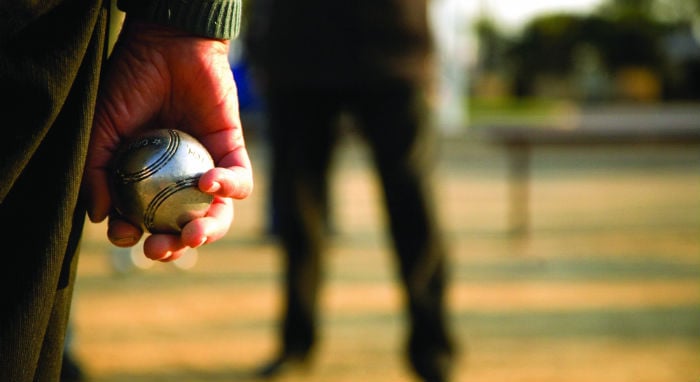 While any player who denies that there are obvious benefits to be gained from a thorough workout in the gym is being economical with the actualité, the pleasures of doing weekend battle at the French game of pétanque simply cannot be ignored. It’s highly competitive, calls for immense skill, and yet is slow-moving, and played in a relaxed and friendly atmosphere.

Those who participate clearly love everything about it, and for five years now, a kernel of players in Dubai have been meeting on Friday afternoons to play socially, and even organised a number of tournaments.

The concept is similar to British lawn bowling, Iceland’s curling or bocce in Italy. Everyone who has spent a summer on France’s beaches, where le tout Août takes place, knows that the game consists of throwing metal balls, or boules, at a wooden jack at a distance of 6-10 metres. Ends are played until a team wins by reaching a target of 13 points. Teams consist of six boules, in either doublette formation (two players with three boules each) or as triplettes (three players with two). More rarely, as with Dubai’s November tournament, two players with three boules each face off
head-to-head.

The strategy of the game lies in deciding whether to “point,” or place, your boule as close to the jack as possible, (a difficult decision on the treacherous and stony ground typically found in Dubai’s best playing areas) thereby forcing your opponent to play, or to “shoot,” which involves throwing the boule at much higher velocity to displace an opponent’s and thereby win the end. However, shooting is a skill that takes months, if not years, to master. Le tire, successfully shooting at balls in scoring position to knock them out of the way, is one of the most highly- prized skills in French popular culture.

One attraction of the game is the way in which novices on a good day occasionally manage to give the best players a run for their money. And it is this talent of pétanque for renewal and infusions of fresh blood that makes it so popular.

Recent reports say that from Paris to the Côte D’Azur, pétanque is back in fashion, with up to 15 million French playing the game. But it also has international appeal at the highest level: tournament pétanque is played not only in France, but Madagascar, Morocco, and Thailand are thought to be among the world’s leading nations, often sending teams to the world championships, which took place in Senegal in 2008, Turkey in 2010 and France this year.

In Dubai, an informal group drawn from the top echelons of the emirate’s healthcare, pharmaceuticals, travel and tourism, retail, engineering and diplomatic professionals meets on Friday afternoon at Arabian Ranches, and is looking for new players, whether French or not, to join in.

For more information about playing the game in Dubai, visit “Dubai Petanque” on Facebook.