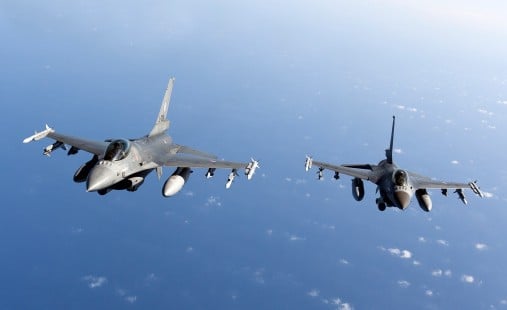 The Pentagon has notified Congress of a possible sale of weapons and other equipment valued at $270 million that would be part of a larger, multibillion-dollar deal for 30 more F-16s that is still under discussion by Lockheed Martin Corp and the United Arab Emirates.

The Defense Security Cooperation Agency told lawmakers it had approved the sale of guns, navigational systems, night vision devices and other equipment as part of a “Block 61” version of the F-16s, if that deal is finalized.

Lockheed is continuing to negotiate with UAE about a direct commercial sale of the F-16s, but congressional approval is needed for some of the equipment that would go on the jets.

Lawmakers have 30 days to block the sale, although such action is rare.

Lockheed declined comment on the timing of a possible sale of additional F-16s to UAE, which acquired its current Block 60 F-16s in the early 2000s. Initial talks involved 25 additional aircraft, but the number has now increased to 30, according to the Pentagon notification sent to Congress last week.

“We continue to work with the UAE to ensure their fleet is well maintained and up to date. Any questions regarding the potential upgrade of Block 60 aircraft or the potential sale of new Block 61 aircraft should be directed to the U.S. or UAE government,” said Lockheed spokesman Mark Johnson.

The Pentagon’s notification marked the first mention of a Block 61 version of the aircraft.

Lockheed declined to give any details about the new model and how it differs from the 80 Block 60 F-16s now flown by UAE.

In its notice to Congress, the Pentagon said UAE had been and remained an important force for political stability and economic progress in the Middle East.

“The proposed sale will improve the UAE’s capability to meet current and future regional threats,” it said, noting that UAE hosted and supported vital U.S. forces stationed at Al Dhafra Air Base, and played a vital role in supporting U.S. interests in the Gulf region.