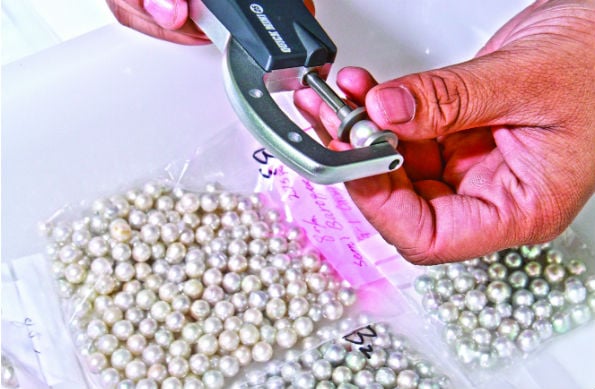 Abdulla Rashid Al Suwaidi, founder of the first company in the Gulf to produce cultivated pearls – RAK Pearls – is a man on a mission.

Al Suwaidi wants to re-establish the UAE’s pearling industry and has nurtured this idea since his youth. This year, he expects to make a profit for the first time since setting up the company in 2005 and he’s set to take his passion to wider shores.

“By the end of this year, we will be making a profit. Before we were just covering our costs because the cost is high in the first years,” he says. “Investment in pearl farming is long-term.”

That investment has paid off with the firm now producing 40,000 pearls annually and aiming to reach half a million pearls in three years’ time by expanding into other Gulf states, with talks in “advanced” stages with some countries, Al Suwaidi adds.

In June this year, Al-Suwaidi took his pearl dream one step further. To boost his company’s international stature, RAK Pearls held an auction of 5,000 of its pearls, the first auction of its kind in the Dubai Pearl Exchange – a unit of government-owned Dubai Multi Commodities Center (DMCC).

“We are saying loudly there is an actual pearl auction available in the Gulf now and it is a good chance to see price indications from wholesales, from pearl retailers and jewelers,” said Al-Suwaidi.

“Currently we deal with selective jewelers and a few retailers or resellers of pearls, but coming to the Dubai Pearl Exchange will give us a chance to see the industry in general, with a lot of DMCC members able to offer a perspective on regional pearl pricing.”

Founded in 2007, The Dubai Pearl Exchange (DPE) held its first ever sale in 2009, shifting pearls worth $5 million. In 2011, the exchange held trade auctions in partnership with leading pearl farmers Paspaley, Jewelmar, and Robert Wan, attracting over 100 pearl traders from more than 20 countries.

Now the exchange is keen to raise the profile of pearls cultivated closer to home.

“Only three to four per cent of the jewelry industry is comprised of pearls. Salt-water pearls are the most sought- after natural pearls. And the bigger they are, the more demand there is for them,” commented Ahmad bin Sulaymen, executive chairman of DMCC. “When you look at fresh water pearls, mainly sourced from China and Asia, they are struggling to find real value in them.”

RAK Pearls decided to hold its first auction in the DPE to raise the regional profile of the company first, then internationally as the company grows.

“Bidding and auction has been on our minds since we started producing pearls, but the where and how was left to the growth that we see in the pearl market in the region here,” said Al-Suwaidi.

“Potentially there are pearl auctions happening every year in Hong Kong and in Japan, but we are focused on the region. Local bidding will emphasise the importance of the pearl trading history in this region.”

Historically, the Gulf region produced a large percentage of the world’s natural pearls before Japanese technology was introduced in the 1930s, effectively killing off traditional Gulf pearl diving.

With the advent of oil discovery in the Gulf, cheap cultured Asian pearls rose to the fore. But today the very same Japanese technology is being used to help RAK Pearls revive the country’s long-faded ancestral income.

“We have been approached by a couple of world-famous cosmetics companies,” says Al-Suwaidi.

For the DMCC, the pearl industry and auction is just one of many initiatives aimed at attracting commodity traders. The centre is already a major hub for the diamond and gold trade; for the first half of the year, trade volumes of rough diamonds increased by 10 per cent to 66 million carats, with value rising by five per cent to $6.2 billion, compared to the same period last year.

The value of gold passing through Dubai in 2012 increased to $70 billion from $56 billion in 2011, accounting for over 25 per cent of the world’s physical gold.