Longevity is clearly on the agenda for English golfer Paul Casey. A flash in the pan, high-octane sprint with a few memorable victories, followed by an equally rapid descent and walk into the sunset is typical of more than a few sportsmen. Casey is not among them.

He turned professional in 2000. Twenty-two years later, he still has fight and is challenging players half his age. Proving a point, he rocked up to the 2021 edition of the Dubai Desert Classic a year ago and sealed his 15th victory on the European Tour. That win – amid a pandemic that exacted a telling toll on professional athletes around the world – was a particularly memorable one. “I really struggled with the temporary pause that we had on the PGA Tour because of Covid-19. I wasn’t playing well at the time. I just had to re-focus and get 2020 behind me. Our performances on course are what is always talked about, but I had a rubbish time off the course as well, as I couldn’t operate the way I normally could,” Casey told Gulf Business recently.

“I arrived [in Dubai] on a Tuesday night because I had played golf in the United States the week before. I woke up on Wednesday morning before playing the Pro-Am quickly in a total daze due to the jet lag. I ended up going on to win the event, but I was physically exhausted. It shows that energy can sometimes come from another source. At that point, we were heavily locked down with Covid-19, and not allowed to leave our hotel rooms. At the course, we had about 500-800 spectators. When we got to these pockets of spectators on the golf course, it was brilliant because we literally hadn’t played in front of anyone. To me, it was just one of the coolest events on the tour.” 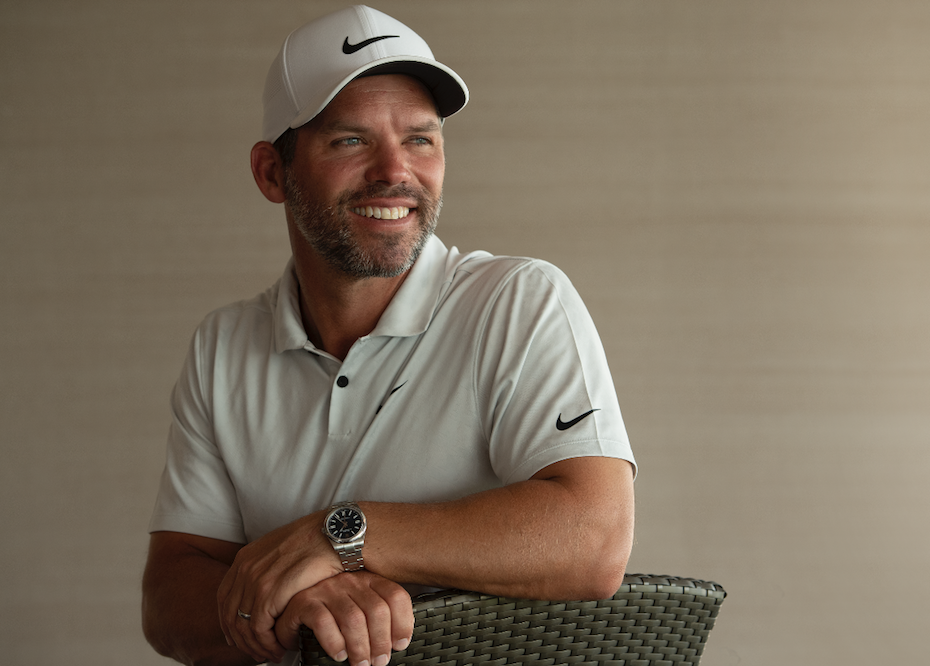 The reigning Slync.io Dubai Desert Classic champion is back this month to defend his title at the Emirates Golf Club. Significantly, this year’s tournament which will be held from January 27-30, has been upgraded to the European Tour’s Rolex Series with the prize fund more than doubled from the existing $3.25m to $8m. “There is a massive difference between normal events and Rolex Series events. I feel like it has finally been elevated to the position that I think a lot of us felt it was at. For an event that is so new, it has gained a lot of prestige amongst the players. It also shows the importance of golf in this region. The fact that Rolex chose Abu Dhabi and Dubai just shows the level of significance Rolex has with golf and the UAE,” says Casey.

Previous winners of the Desert Classic include Tiger Woods, Henrik Stenson and Ernie Els. This year, Casey faces up to stiff competition from the likes of world number two Collin Morikawa, former world number one ranked Rory McIlroy as well as fellow Major winner Sergio Garcia. The addition of the Desert Classic to the Rolex Series event means players may have to select which of the string of tournaments they choose to play during a packed calendar year. “The reality is we don’t play every Rolex Series event. It is a tricky balance between trying to win Majors and Rolex Series events, but maybe it will be the first time I play all five,” notes Casey, who is a Rolex Testimonee since 2009.

Casey says that the first Rolex he bought was early on in his pro career in 2001 when he won the Scottish PGA and rewarded himself by buying a ‘Pepsi’ dialled GMT which he still has. When we meet on the sidelines of the 2021 edition of the DP World Tour Championship in November, he’s only too happy to slip his Oyster Perpetual 41 from the Ryder Cup off his wrist to give us a closer look at it. It has the number 130 inscribed on the back. “The significance of this watch is that it was presented to every Ryder Cup player on the European Tour. Rolex presents a timepiece to every player and captain of both the United States and Europe. There have only ever been 164 players to represent Europe at the Ryder Cup, and I was the 130th player [to do so], so this number was engraved by Rolex on the back of my watch.

“The reason we are reminded of this is because it shows how only a small number of people have actually represented Europe. Thousands of people have climbed Everest, about 550 people have been into space and yet there are only 164 people that have played in the Ryder Cup for Europe.”

Of his Ryder cup collection, Casey says he was also given a steel and gold blue face Submariner from Bernhard Langer in 2004, and in 2006 he received a yellow gold and steel Daytona with a champagne gold face. It was also in that 2006 edition in Ireland when Casey became the first player ever in Ryder Cup history to win a foursome match with a stunning hole-in-one.

At 44, Casey is still hunting victories, though the raw temperament characteristic of younger players seeking to prove themselves has been smoothened out with the maturity that comes with being pro for over two decades. “I used to live and die by the results in my 20s and 30s. I feel like I’ve been trying to strike a balance between reflecting on my career, for example [participating in] the Olympics which was a goal I achieved,” he says.

“A lot of athletes say don’t look back until you’re finished. But I’m definitely able to look back and think that was a really good victory.” And when Casey thinks back – considering his current form and the competition he is up against – the 2022 edition of the Slync.io Dubai Desert Classic could well be that victory which Casey reckons ranks among his career’s finest moments.