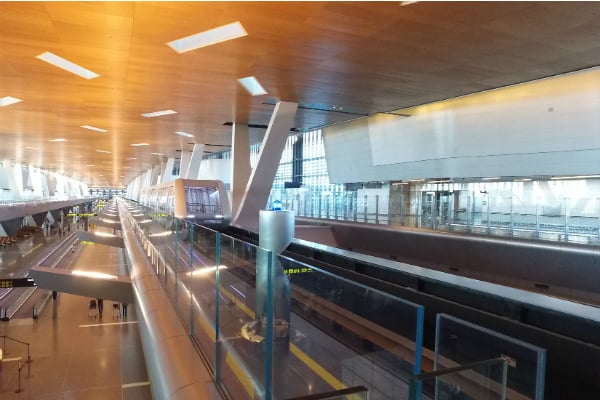 The dual train service was officially inaugurated in a ceremony today after months of safety certification.

It is designed to shuttle passengers between the South and North Nodes of the normal, significant reducing walking time for those arriving and departing, including transferring passengers.

Departing passengers can board from the South station behind the airport’s iconic Lamp Bar and travel to North station located near Concourses D and E.

Arriving passengers can board at the North station and travel to the transfers hall and arrival immigration near the South station.

“The continued investment in HIA, our home and hub, will ensure that it remains one of the world’s most advanced airports, a destination on its own, and meeting the growing needs of more than 30 million travellers who choose to fly across HIA,” said Qatar Airways group CEO Akbar Al Baker.

Each passenger train will have five carriages with a capacity for 38 people per carriage, or 190 people at a time.

The two trains, which travel at 7m per second, will be operated simultaneously in a synchronised manner and remain operational 24 hours a day.

Airport trolleys will be restricted but the service is designed to be used by passengers with reduced mobility and those accompanied by support animals.

The North Node opened earlier this year in response to higher passenger demand.