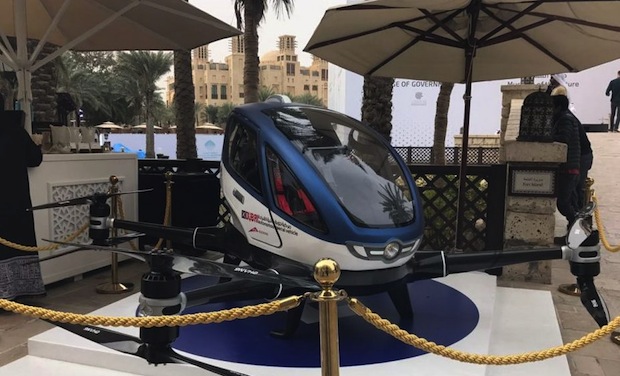 The director general of Dubai’s Roads and Transport Authority has confirmed that drones capable of carrying people could be available in the emirate by July this year.

Mattar Al Tayer, also the chairman of the RTA, revealed at the World Government Summit in Dubai on Monday that trials had already been completed with Chinese company EHANG using drones able to carry up to 100kg plus a small suitcase.

The EHANG18 autonomous aerial vehicles has a 30-minute runtime and can operate within an area of 40-50km. Featuring state of the art navigation technologies, the drone is auto piloted and is be directed and monitored via a command centre using 4G mobile technology.

The drone is operated via a touchscreen that displays a map with dots for destinations. The passenger selects the destination and the drone flies on a preset route. After running out of battery the vehicle takes up to two hours to recharge.

“The AAV exhibited at the World Government Summit is not just a model; it is a real version that we have already experimented the vehicle in a flight in Dubai sky. The RTA is making every effort to start the operation of the AAV in July 2017,” said Al Tayer.

In December last year the RTA signed two memoranda of understanding with Khalifa University and the University of Dubai to boost cooperation in the field of drones and robots.

A month earlier, in November the RTA revealed it would use drones to monitor Dubai’s roads, using a live traffic feed to check for accidents and other problems. Deployment of these drones is expected to begin in the second quarter of this year.

Drone technology has become a focal point for the United Arab Emirates in recent years, with an annual international competition and award – UAE Drones for Good – launched by the UAE government in 2014.

The emirate has also committed to making up to 25 per cent of all transport trips autonomous by 2030.