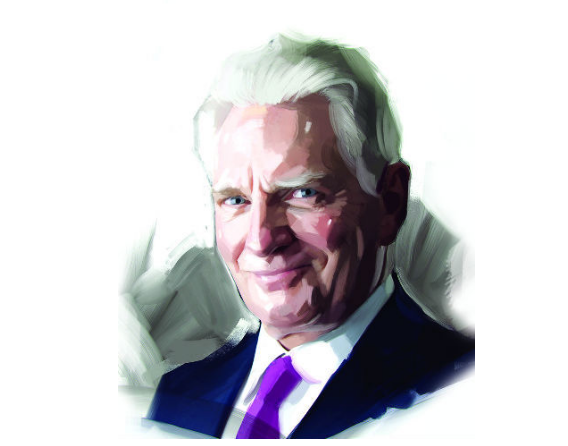 We have entered the ‘Anthropocene age’ where humans are systematically destroying their environment, their livelihood, their home and their planet.

Past geological epochs were the result of external forces of nature or cosmic events. This time it is human action that is leading to calamitous climate change. An Intergovernmental Panel on Climate Change report has warned that the world is on a path that could, if left unchecked, deliver a global average temperature rise of 4°C or more by the end of the century.

A temperature increase of 4 or 5°C or more has not been seen for tens of millions of years (homo sapiens have been around for 250,000 years) and is likely to be enormously destructive. Too much or too little water has the potential to cause severe and sustained conflict and the migration of hundreds of millions. Not to mention, the decimation of animal and plant – life and habitat. Managing climate change is today the central challenge facing humanity. But will we take action now or procrastinate?

Some 200 global leaders are sched- uled to meet for the Paris Conference of the Parties 21, in an attempt to finalise an international agreement to limit global warming and adapt to its impacts. The proposed deal calls on countries to transparently report on greenhouse gas emissions and commit to ramp up climate action over the next few decades. Any agreement is unlikely to be legally binding. However, the ‘intended nationally determined contributions’ are what sets the Paris talks apart from past attempts at a global climate agreement in Kyoto in 1997 and the failed Copenhagen summit in 2009

The World Resources Institute states that the clean energy plans of Brazil, China, the European Union, India, Indonesia, Japan, Mexico and the United States – which together account for more than 65 per cent of the world’s primary energy demand – would more than double their annual clean energy supply by 2030. Yet commitments should include not just targets but also policies and measures, and local institutions, to implement them. Paris COP21 is a chance to build understanding not only of threats and risks but of the opportunities that lie in the transition to the low-carbon economy.

Where do the Gulf Cooperation Council nations stand on these issues?

The GCC has some of the world’s highest per capita consumption rates of fossil fuel energy and electricity. As a result, it has some of the highest CO2 emissions in per capita terms. Vehicular emissions are one of the main sources of air pollution in the GCC. It may not be well known but the United Arab Emirates tops the world for exposure to tiny air pollutants, accord- ing to the World Bank. The UAE’s PM 2.5 level (which measures tiny airborne pollutants smaller than 2.5 microns) stood at 80 micrograms per cubic metre in a report this year. Much higher even than countries such as China (73 micrograms) and India (32 micrograms). Qatar stands second among the GCC nations, with its level at 69 micrograms and Saudi Arabia quite close at 62.

Earlier in November, Saudi Arabia submitted its intended nationally determined contribution, revealing its aim to slash its emissions by up to 130 million tonnes by 2030. Shy on details, the document does not mention the current levels of green house gas emissions. It underscores the fact that its plan is dependent on ‘robust’ oil export revenues over the coming decades and the country ‘reserves the right’ to update its plan.

The UAE, in October, announced its target to increase low-carbon energy contribution to the overall energy mix from 0.2 per cent in 2014 to 24 per cent in 2021. To achieve this target, the UAE will implement energy efficiency measures, feed-in tariff reforms and demand-side management initiatives. Such measures would include dissemination of information to consumers about their power consumption patterns, implementation of electric appliance entry efficiency standards and setting water and energy consumption standards for buildings.

It is the economics that matter

The New Climate Economy report by The Global Commission on the Economy and Climate identifies 10 key areas of opportunity for stronger climate action. These could bring significant economic benefits. There is the potential to achieve at least 59 per cent and as much as 96 per cent of the emissions reductions needed by 2030, to keep global warming under 2°C. The report has four main points. One, moving to a low carbon infrastructure is not a ‘climate cost’ but a ‘climate investment’. Two, emissions need to stabilise at a lower level than previously thought. Three, clean energy is keeping a lid on the cost of a low carbon transition. We should invest at least $1 trillion a year in clean energy, compared to current levels of $260bn. Four, any Paris agreement needs to include a ‘ratchet mechanism’ – a facility for a regular review and revision of targets, given the falling costs and rising awareness of countries.

There is no trade-off between investments required for a low-carbon economy and economic growth. ‘Climate’ must be integrated into economic decision-making processes at the levels of government, society and businesses. This requires a major shift by policymakers and business leaders in their strategic outlook. It is also urgently required in the Middle East and North Africa region where oil producers are at the crux of energy market developments.

Moving the GCC to decarbonise

Energy consumption patterns in the GCC region are unsustainable. Due to high and growing air pollution levels and carbon footprints, the region faces high risks from climate change. What should they do to decarbonise?

(a) Phase out fuel subsidies

In addition to imposing large fiscal costs, energy subsidies distort consumption and production patterns, and encourage energy intensive activities. A recent Inter- national Monetary Fund report found that post-tax subsidies, accounting for environ- mental and other damages resulting from subsidies, are projected to reach $5.3 trillion in 2015. This is equivalent to 6.5 per cent of global gross domestic product and a staggering 13 to 18 per cent of regional GDP in the Middle East and North Africa plus Pakistan region. Eliminating energy subsidies by raising energy prices to inter- national levels would improve energy efficiency in all sectors and generate sub- stantial environmental and health benefits.

(b) Impose a carbon tax

A carbon tax is usually defined as a tax based on emissions generated from burning fuels. This will transform energy investment, reduce fuel consumption, increase fuel efficiency and sharply reduce the carbon emissions that are driving global warming. A carbon tax creates incentives for energy consumers to use cleaner fuels and adopt new clean technologies, thereby reducing the amount they pay in carbon tax. For the GCC nations, a carbon tax would also be a way of diversifying revenue.

If current policies are unchanged, over 170 GW of additional capacity will be required in the GCC region alone by 2020. The GCC should aim to receive over 50 per cent of its generation capacity from solar power. Prices for solar photovoltaic modules have fallen over 80 per cent since 2008 and will be at grid parity in 80 per cent of countries in the next two years. The cost of energy storage is also rapidly falling.

Green financing, including green bonds and Sukuk, is attracting new investors as part of sustainable finance. The UAE, which is hosting the International Renewable Energy Agency, has an open and developed international financial sector proficient at financing hydrocarbons. It can become the first global hub for renewable energy finance, tapping the Gulf region’s enormous financial resources.