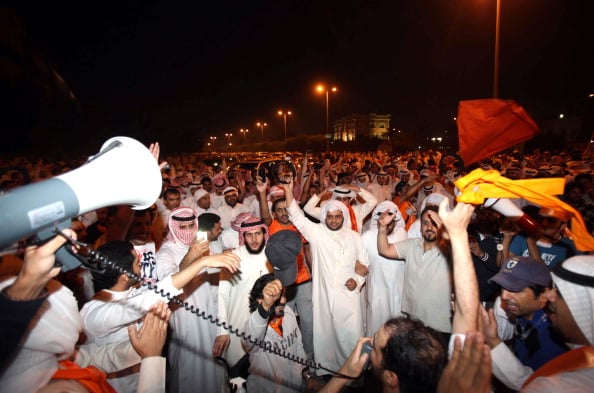 They enjoy scholarships, secure jobs and generous salaries at a time when so many young people around the world have dim prospects and are underemployed. So why are thousands of young Kuwaitis so dissatisfied?

The answer, for Abdullah Ashkanani, who like more than half of Kuwaitis is under 25, is about fairness and the freedom to speak out.

Despite the many benefits that accrue to all Kuwaitis, the authorities do not seem to distribute the country’s wealth and power fairly, said Ashkanani, a student, and this is something he wants to change for the next generation.

“One day we will get married and have children and we want them to have a fair, equal life,” the 24-year-old said at a protest in the capital this month.

“It is not about money. It is also about freedom and freedom of speech. Do not think you can give us money and we will sit at home and shut our mouths.”

Thousands of Kuwaitis have taken to the streets in the Gulf Arab state since late October ahead of a parliamentary election set for December 1.

Although the rallies have been about new voting rules, young people have joined in to protest about wider issues, such as corruption, the accountability of government ministers and elected officials as well as a lack of infrastructure development due to a legislative deadlock.

“Some people here have the best life, but others do not,” said 34-year-old law researcher Abrar al-Mugahwi. “It is about what is relative.”

She said she is fed up with people using their family connections to jump waiting lists for benefits such as housing and says education is substandard.

“When I look at league tables for schools, Qatar is always near the top and Kuwait right near the bottom – maybe in place 100. We know we are richer than other countries in the region, so why is this?”

Like many protesters, she voiced a fear about the future of the country, which while fiscally sound for now, depends on oil for more than 90 percent of its revenues and has struggled to diversify its economy for years.

A long-running row between the government and parliament has stalled implementation of major parts of a 30 billion dinar ($107 billion) development plan announced in 2010, including projects to build a refinery, a new airport and hospitals.

“I know that oil will end one day, but for now we only eat and drink and live without action. But what will happen afterwards?” Mugahwi said.

Tensions between the government and opposition groups have intensified, triggering protests, but Kuwait has been spared the kind of severe unrest that toppled three veteran Arab leaders in 2011. It boasts the most open political system in the Gulf and allows a greater measure of dissent than its neighbours.

Young people, who can vote from 21, are offered generous scholarships to study abroad and many choose universities in the United States, Canada and Britain, allowing them to also perfect their English and gain exposure to foreign cultures.

Once they graduate, most can go into a stable government job or wait for one and get state support in the meantime. If they choose to work for the private sector, the state often supplements their salary.

Salaries are also good by the standards of most countries. Under government plans announced in March, customs inspectors get a starting salary of 1,200 dinars ($4,310) a month tax-free, while a junior law clerk gets around 840 dinars.

All this may sound like a dream come true to young people in the West who these days can expect to face long periods of joblessness or underemployment on graduating. A global downturn has led to some of the highest unemployment figures in the euro zone since the formation of the single currency in 1999. U.S. unemployment has eased but the economy is still about 4.5 million jobs short of where it stood when the 2007-09 recession started.

But those who are looking for something a bit less prescribed – who have entrepreneurial ambitions, for example – say Kuwait is far from a paradise.

A bloated public sector with a strict hierarchy means Kuwait can be a bureaucratic headache, full of complicated paperwork and red tape. Family and social connections are often used to fast-track the system.

Jassim, 28, said getting a business license through normal channels can take up to seven months.

“And look at the lack of development in the past ten years. We contribute to the development of hospitals in other countries but we do not build new ones here,” he said, asking to be identified only by his first name.

ANOTHER DAY AT THE MALL

Some young Kuwaitis say they are also frustrated by restrictions on behaviour in their country, which has strong social and political ties to Saudi Arabia, its more conservative neighbour.

Men and women sit segregated in Kuwaiti universities and relationships before marriage are generally taboo, with courting either done in the presence of family members or in secret for those from more traditional backgrounds. Many get around the rules online, and some of the more daring gather on the main roads at the weekend to flirt in traffic jams.

Young people complain that there are few places for them to socialise outside the home away from their families. There are coffee shops and juice bars but no nightclubs; entertainment centres are oriented towards families. Scorching summers mean outdoor activities are restricted to the winter months.

Her sister Fatma, 21, was interested in the latest political debate, but already appeared to be disillusioned.

“I think 75 percent of the candidates are only in it for the money and the special seat,” she said.

She said if she did decide to take part in the election, she was only certain of who would not get her vote.

“We don’t like the very strict Muslims, the Salafis, they want to make Kuwait like Saudi Arabia and restrict women, to stop us from being able to drive.”

Others said they felt distant from Kuwait’s gerontocratic political system and did not feel like they could seek change through elections.

Kuwait’s government is run by a prime minister appointed by the emir and top posts are filled by members of the ruling family.

The 50-member parliament has legislative powers and the right to summon ministers for questioning, but the emir has the final say in state affairs, can veto laws and dissolve the assembly. December’s poll will be the fifth since mid-2006.

“The problem in Kuwait is that the people do not feel like they run the country,” said 26-year-old research assistant Faraj al-Saadi.

“We don’t have an elected prime minister and the government is appointed. It is always someone else making the decisions.”