Pakistani plane with 99 people onboard crashes in Karachi - Gulf Business 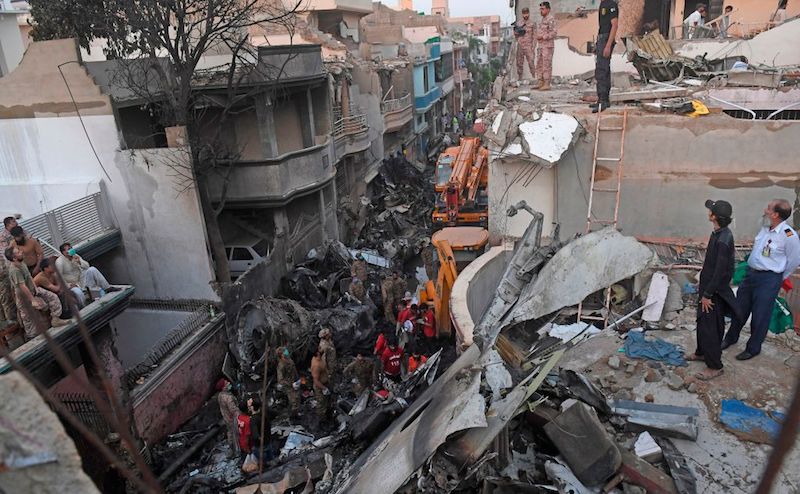 A Pakistan International Airlines Corp. flight with 99 people aboard crashed into a residential neighborhood of Karachi as it approached for landing, setting off an urgent rescue effort amid smoke and debris.

At least two passengers on the Airbus SE A320 jet survived the impact, Sindh government spokesman Murtaza Wahab said in a tweet. One of them was Zafar Masud, president at Bank of Punjab, he said.

The injured were being taken to local hospitals, while some people remained trapped under debris, local officials said on Pakistan’s GEO TV. There was no immediate word on the number of casualties, which included people on the ground when the plane went down after reporting engine trouble.

Flight PK 8303 from Lahore was carrying 91 passengers and 8 crew, the Civil Aviation Authority said in an updated tally. Television footage showed cars and homes on fire in the neighbourhood near the airport in the nation’s commercial hub. The A320 narrow-body jet first entered service in 2004, and was operated by PIA since 2014, Airbus said.

The pilots in Friday’s crash reported losing power from both engines, according to a recording from LiveATC.net, which collects audio feeds from air-traffic controllers.

“Sir, we have lost engines,” the pilot said to a controller, according to the LiveATC recording.

It’s the second plane crash for the state-owned carrier in less than four years. Pakistan International’s chairman resigned in late 2016, less than a week after the crash of an ATR 42 turboprop killed 47 people.

“Although the public sector national carrier’s administration has been mismanaged for decades, this never reflected the engineering competence,” said Burzine Waghmar, a member of the Centre for the Study of Pakistan at SOAS University of London. “PIA’s maintenance and engineering is second to none.”

The airline, founded in 1946, suffered as many as 51 safety-related incidents before Friday’s crash, according to data from Aviation Safety Network.

Airbus said it was providing technical assistance to France’s Bureau d’Enquête et d’Analyse and to Pakistani authorities in charge of the investigation. Engine manufacturer CFM International said it was monitoring the situation.

The A320’s pilot had reported a “technical fault” before deciding to go around instead of landing, Chief Executive Officer Arshad Malik said in a video message. The carrier is trying to determine what the technical fault was, Malik said.

Pakistan’s Prime Minister Imran Khan on Twitter said he’s in touch with the CEO and that an investigation would be conducted soon. While the country’s army tweeted that troops had reached the site to conduct relief-and-rescue efforts.

The plane damaged as many as 20 houses, Ahmed Edhi, spokesman for rescue agency Edhi, said by phone from the accident site.

Like other carriers worldwide, PIA struggled with plane groundings in the wake of the Covid-19 pandemic. The company, which hasn’t made a profit since 2004, asked the government for financial support in March. Friday’s crash happened as the nation started holidays to celebrate Eid Al-Fitr, when many Pakistanis return home to celebrate.

But signs of a recovery were in sight as the country began emerging from a two-month lockdown. Pakistan recently began resuming domestic flights last week, starting with 20 per cent of capacity.

Globally, airline safety had improved last year, with an accident rate of one per every 884,000 flights compared with an average of 640,000 for 2014-18, according to the International Air Transport Association.

The Pakistan crash comes at a terrible time for airlines, which are staring at a $314bn loss in ticket sales this year, as the coronavirus outbreak idles 70 per cent of global capacity, IATA has said.