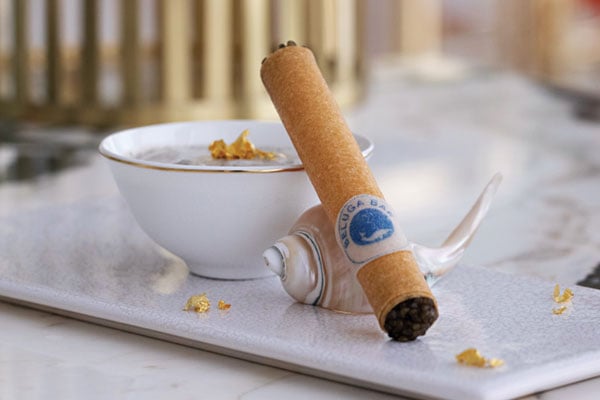 Dubai is no stranger to extravagant culinary offerings.

The Ruri set menu at the nine-seater Hoseki restaurant in the Bulgari Resort Dubai can set you back Dhs 1,400 while the black diamond ice cream that is made from Madagascan ice cream, Iranian saffron, Italian black truffle and 23-karat gold served at the Scoopi Café costs Dhs2,999.

Recently, Beluga the only dedicated caviar restaurant in Dubai, opened at the Mandarin oriental Jumeira in Dubai.

One of the most extravagant, though not the most expensive, dish on the menu is the Dhs1,550 24-karat Golden Cigar with Almas Caviar.

The cigar-shaped creation is reportedly oven-baked and is filled with a combination of smoked salmon, yuzu and mustard sauce.

Alongside, you can customize the dish by ordering your choice of caviar. The options include Royal Baerii (Dhs200), Russian Oscietra (Dhs300), Beluga Caviar (Dhs550) and even the most expensive offering, Almas Caviar (Dhs1550).

The dish golden cigar also comes with a dipping sauce whose recipe is a secret.

If you are feeling even more indulgent than that, a separate 250gram portion of Almas Caviar from the a la carte menu for Dhs36,305 – making this one of the world’s most expensive dishes.