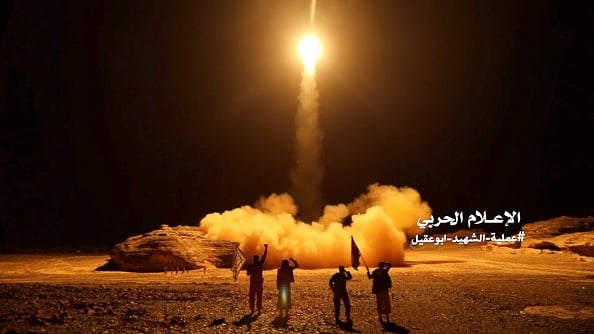 One person was killed and 11 were injured after Saudi forces intercepted a missile fired from Yemen on Wednesday.

The missile, fired by the Houthis, was targeting the “densely-populated civilian areas” in Jazan, the official Saudi Press Agency (SPA) reported.

Colonel Turki Al-Malki, the official spokesman of the Saudi-led coalition fighting in Yemen, stated that the Air Defence detected a ballistic missile launch from Northern Amran aimed at Saudi Arabia at 8.34pm.

The missile was intercepted and destroyed by the Royal Saudi Air Defense.

“The interception resulted in projection of fragments throughout some residential areas, which caused the martyrdom of a Yemeni resident, and injuries among 11 civilians,” said Al Malki.

“This hostile act carried out by the terrorist Iranian Houthi militia proves that the Iranian regime is still providing them with advanced capabilities, in flagrant defiance of UNSCRs 2216 and 2231, with the main objective of threatening the Saudi Arabian, regional and international security,” he said.

He added that the firing of ballistic missiles at populated cities and villages is contrary to international humanitarian law.

The kingdom has recorded more than 158 missiles and 42,924 projectiles launched at its territory since entering the Yemen civil war in 2015 to support ousted President Abd-Rabbu Mansour Hadi against the Houthis.

While the majority of the attacks have been intercepted by air defences, some attacks have also resulted in deaths, including three civilians killed in Jazan on June 9.

Last week, a United Nations panel of experts confirmed that Yemen’s Houthi rebels are still being armed with ballistic missiles and drones that “show characteristics similar” to those made by Iran.

AFP cited a confidential report to the UN Security Council as confirming the panel “continues to believe” ballistic missiles and other weapons are being transferred from Iran to Yemen despite a 2015 arms embargo.

Iran has denied any role in arming the Houthis despite claims to the contrary from the United States and Saudi Arabia, which continues to blame Iran for each missile attack it intercepts.