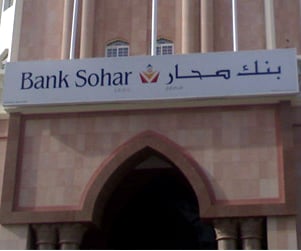 Oman’s Bank Sohar, currently in talks with rival lender Bank Dhofar over a possible merger, posted a 20.5 per cent increase in fourth-quarter net profit on Tuesday.

Sohar, the sultanate’s fifth-largest bank by market value, made OMR8.8 million ($22.9 million) in the three months to Dec. 31, compared with OMR7.3 million in the corresponding period of 2012, Reuters calculated.

The calculation was made using previous financial statements from the lender. Bank Sohar reported a 16.8 per cent increase in annual profit in 2013 to OMR26.9 million, it said in a bourse filing.

In July, Bank Dhofar said it had approached Bank Sohar with a view to merging the two entities and creating Oman’s second-largest bank, with the latter saying it would consider the move later that month.