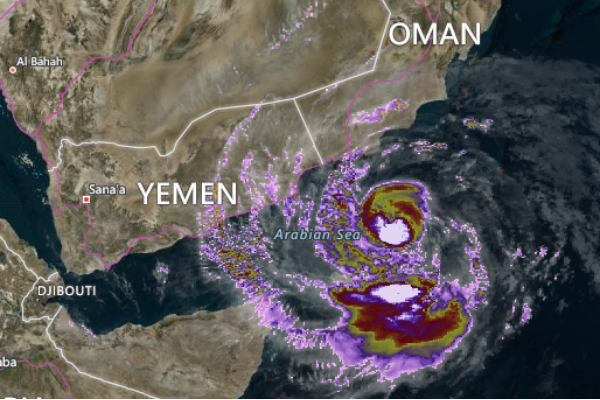 Citizens and residents of southern Oman are buckling down in preparation for the “extremely severe” landfall of Cyclone Mekunu.

At least 19 people were missing and hundreds of others evacuated their homes after the storm hit the Yemeni island archipelago of Socotra on Wednesday night, leading the government to declare a state of emergency.

Conditions deteriorated in Salalah after sunrise on Friday, according to the Associated Press, with a pickup in winds and rain and strong waves.

Oman’s Ministry of Commerce and Industry earlier in the week called on citizens not to overbuy commodities and essentials ahead of the storm and assured that fuel would be available at petrol stations in Dhofar and Al Wusta governorates.

“The Ministry invites citizens and residents in Dhofar and Al Wusta governorates to supply basic materials, and ask the citizens to avoid over-purchase as all materials will be available,” it said in a statement.

Emergency teams have been formed in a number of areas in anticipation of the storm and shelters have been made ready.

Residents have been warned not to visit areas particularly susceptible to flooding like valleys and avoid entering the sea until the cyclone has passed.

Patients at Sultan Qaboos Hospital in Salalah were evacuated on Wednesday. Operations to evacuate people in areas of Dhofar and Al Wusta governorates expected to be hit particularly hard by the storm were also underway on Wednesday and Thursday.

The Royal Air Force of Oman evacuated several families in Dhofar on Thursday, Oman News Agency reported. The country’s army also brought in communications equipment on trucks in anticipation that telecoms and internet lines may be cut as the weather worsens.

Officials inspected a number of dams in Dhofar, including those protecting Salalah city from flooding, and said they were ready for the anticipated heavy rains.

Oman’s Public Authority for Civil Aviation (PACA) said Salalah Airport would be closed from 12:00am on May 25 for at least 24 hours.

The authority said the closure “could be extended, depending on the development of the weather conditions”.

PACA said in a midnight update that the cyclone was 270km from Salalah and was expected to intensify into a category 2 storm within 12 hours.

The eye of the storm was forecast to reach Dhofar on Friday morning, with surface winds recorded at up to 148kph.

Other meteorologists said the storm would make landfall near Salalah early Saturday.

Royal Oman Police said in a Friday update that residents had been transferred to safe places in the province from areas including Daharez, Hadhaf and Wilayat, Rokhut and. Those in older houses and lowland areas were also encouraged to leave their homes.

The last powerful cyclone to hit Oman, Cyclone Gonu in 2007, caused $4bn in damage across the sultanate and killed more than 70 people across the Middle East.

Yemeni government spokesperson Rajeh Badi told state news agency SABA that Socotra “requires urgent aid to help people stranded in their villages or those who reside in the mountains”.

Nineteen people were missing after seven boats capsized and three cars were washed away by floods, said one Yemeni government minister, adding that evacuations to shelters are still under way in the island’s capital.

Another official said more than 200 families had been evacuated from their villages.

The storm is worsening and most parts of the island have lost communications, said the governor of the nearby province of Hadhramaut.

The same weather system hit the Horn of Africa on Wednesday, killing more than 50 people in Somaliland.

Yemeni government spokesman Badi called on international humanitarian organisations and the Riyadh-led military coalition participating in the war to provide urgent aid to the island, where Saudi and UAE forces have a presence.

Coalition spokesman Turki al-Maliki said late on Thursday that the coalition is coordinating with the Yemeni government and humanitarian assistance will reach the island on Friday morning, Saudi-owned broadcaster Al Arabiya reported.

The Saudi ambassador Mohammed al-Jaber said tens of thousands of tons of relief, shelter and medical items are being prepared to be transported to the island, provided by the King Salman Humanitarian Aid and Relief Centre.

Thunderstorms likely to hit Oman ahead of Eid

UAE denies it has strategic ambitions for Yemen’s Socotra