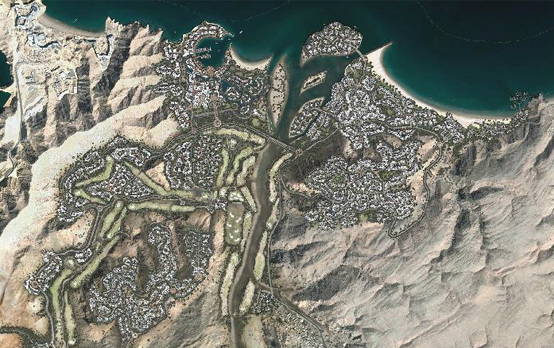 Shukoor Ghammari, a Tourism Lab participant at the recent Tanfeedh think tank and Shura Council member, told Times of Oman that work on the riviera project, would begin soon.

“Nothing has started, but the project has been handed to the Oman Investment Fund,” Al Jabri was quoted as saying.

Work on the multi-million-rial project was halted in 2009 during the financial crisis with only a canal dug at that time, according to the publication.

Under the original plans the development was to include a marina, souq, beach club, health club, three five-star hotels, 1,000 apartments, 720 townhouses, 400 villas and an 18-hole championship golf course.

Around 15 families were relocated from the area under a previous compensation agreement with only five remaining.

Reports in 2013 suggested Qatari Diar Real Estate Investment had taken a 70 per cent stake in the project.

The Tanfeedh think tank has said 10,000 jobs can be created in the country’s tourism sector by 2020 by attracting OMR1.8bn ($4.67bn) of private investment and increasing international tourist arrivals from 1.9 million to 2.7 million.

Negotiations for projects including Yiti are currently ongoing with investors, according to Times of Oman.

The first contract for another major tourism development, the Sultan Qaboos Waterfront, was awarded last month.

It will include business and residential zones a mall, three four-star and three five star hotels, recreational amenities, tourism spots and docking for cruise liners and yachts.