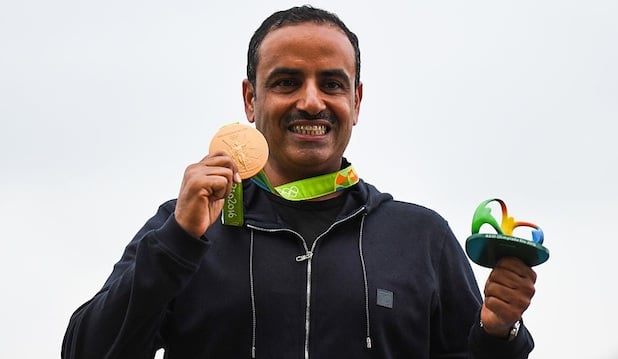 But the 49-year-old, six-time Olympian said he was sad he could not win for Kuwait, banned last year by the International Olympic Committee (IOC).

Aldeehani defeated Marco Innocenti of Italy in the duel for gold, nailing 26 orange targets out of 30 to Innocenti’s 24. The bronze medal went to Steven Scott who defeated fellow Briton Tim Kneale with a perfect score of 30.

Clad entirely in black, Aldeehani pounded his fist on his chest, a gesture he said was to show the Kuwaiti people that “we are here and got the medal.”

“I can’t describe my feeling on the podium,” he said of the moment he watched the Olympic flag hoisted up the pole.

“I am winning the gold medal, the biggest achievement of the Games, without raising my country’s flag. It really hurts me, I can hardly stop my crying.”

The IOC suspended Kuwait in October 2015, accusing the government of interference in its national Olympic Committee. Earlier this month, Kuwait lost a court case against the IOC ban, meaning Kuwaiti athletes would only be allowed to compete under the Olympic flag.

Aldeehani made sports history for his country in Sydney 2000 when he won bronze in double trap and became the first Kuwaiti of any sport to win a medal at the Olympics. He won another bronze in trap in London 2012.

He said that his experience really paid off in the final against Innocenti, himself a three-time Olympian, and knowing he had a medal made him more relaxed.

The 37-year-old Italian said he became very emotional when he knew he was going to medal going into the last round.

“The conditions were rather difficult, the wind, the rain, and each clay target was different, so you really needed a lot of experience and also a little bit of luck,” said Innocenti, whose family runs an armory business back home.

Scott said he was more relaxed competing for bronze against his countryman Kneale.

“I didn’t want to rub it into my team mate’s face, although just a minute ago he was trying to kick me in the butt, so I am pretty sure he’s okay now,” Scott said.