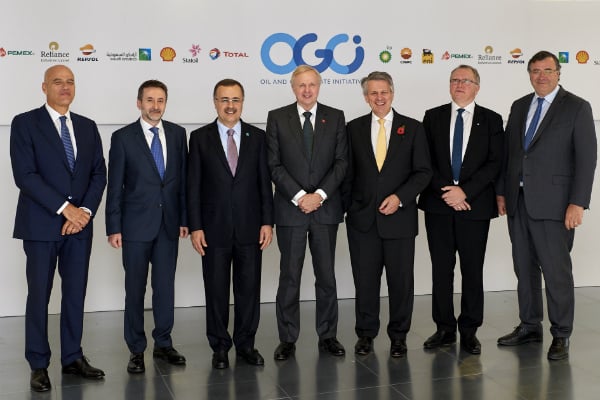 Some of the world’s biggest oil companies, including Saudi Aramco

The Oil and Gas Climate Initiative (OGCI), which also includes Total, BP, Eni, Repsol , Statoil, CNPC, Pemex and Reliance Industries, launched the Climate Investments fund which will invest in technologies to reduce carbon emissions but which will also help an increase gas use.

The companies pledged to use a large share of the $1bn for speeding up carbon capture, use and storage (CCUS) in gas-fired power plants and towards reducing leakages of methane, one of the most polluting greenhouse gases.

“If we can reduce and build the technologies to monitor and reduce fugitive methane emissions that’s like an essential licence for us to be able to advocate natural gas,” BP chief executive Bob Dudley told journalists.

The investment is nevertheless dwarfed by the joint annual spending of the member companies, even as they battle one of the longest downturns in the sector’s history. Shell, Total, BP, Statoil, Repsol and Eni are expected to spend nearly $100bn in 2016.

The 10 firms, which jointly produce around 20 percent of the world’s oil and gas, have already screened a list of 200 CCUS-related technologies and are now assessing which one or ones to develop to commercial scale.

The group will also invest in improving efficiency in transport and energy-intensive industries.

The announcement coincides with the official coming into force of the 2015 Paris Agreement, intended to wean the world economy off coal, oil and gas in the second half of this century in order to slash carbon emissions.

The oil and gas sector, which is directly responsible for 5 per cent of manmade greenhouse emissions and the use of its products for another 32 per cent, is under growing pressure from investors and the general public to help fight climate change.

“If the CEOs of the 10 largest corporations meet six times during the year it’s not for philanthropy, it’s real business,” said Patrick Pouyanne, chief executive of Total.

Critics have said oil companies need to do more to reduce emissions and to shield themselves from climate change risks.

“Companies could be worth considerably more, not less, if they aligned their portfolios with 2C by exercising capital discipline and opting for lower-cost upstream projects that make both financial and climate sense,” said Anthony Hobley, chief executive of think tank Carbon Tracker Initiative.