Obama Struggling Over Whether To Intervene In Syria - Gulf Business 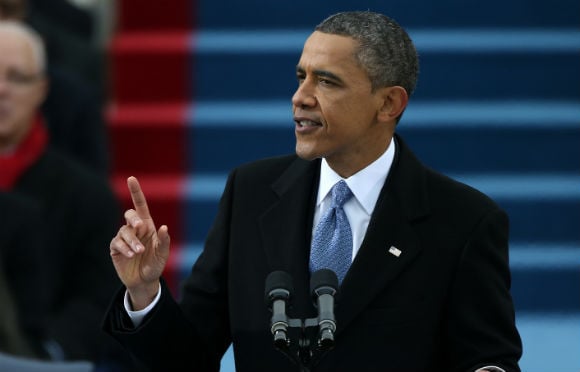 President Barack Obama said he has been wrestling with the question whether a U.S. military intervention in Syria’s 22-month-old civil war would help resolve the bloody conflict or make things worse.

In a pair of interviews, Obama responded to critics who say the United States has not been involved enough in Syria, where thousands of people have been killed and millions displaced according to U.N. officials. Transcripts of both interviews were released on Sunday.

The United States has called on Syrian President Bashar al-Assad to step down, and has recognized an opposition coalition – but has stopped short of authorizing U.S. arming of rebels to overthrow Assad.

“In a situation like Syria, I have to ask: can we make a difference in that situation?” Obama said in an interview with The New Republic published on the magazine’s website.

Obama said he has to weigh the benefit of a military intervention with the ability of the Pentagon to support troops still in Afghanistan, where the United States is withdrawing combat forces after a dozen years of war.

“Could it trigger even worse violence or the use of chemical weapons? What offers the best prospect of a stable post-Assad regime?

Obama’s comments come as world leaders gathered in Davos, Switzerland, said they wished the United States were more engaged in geopolitical issues such as the conflicts in Syria and Mali, where France is attacking al Qaeda-affiliated militants.

Defense Secretary Leon Panetta said on Saturday that the United States will fly tankers to refuel French jet fighters, expanding U.S. involvement, which had been limited to sharing intelligence and providing airlift support.

In an interview with CBS television program “60 Minutes,” Obama bristled when asked to respond to criticism that the United States has been reluctant to engage in foreign policy issues like the Syrian crisis.

Obama said his administration put U.S. warplanes into the international effort to oust Muammar Gaddafi in Libya, and led a push to force Egyptian President Hosni Mubarak from office.

But in Syria, his administration wants to make sure U.S. action would not backfire, he said.

“We do nobody a service when we leap before we look, where we … take on things without having thought through all the consequences of it,” Obama told CBS.

“We are not going to be able to control every aspect of every transition and transformation” in conflicts around the world, he said. “Sometimes they’re going to go sideways.”