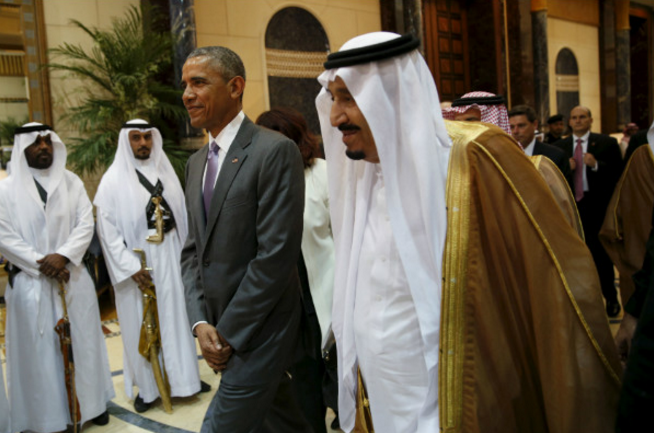 US President Barack Obama met Saudi Arabia’s King Salman on Wednesday to seek joint action on security threats including Iran and Islamic State – and to talk through tensions between the two allies that have been laid bare in recent weeks.

Obama’s fourth and likely last visit to the world’s top oil exporter has been overshadowed by Gulf Arab exasperation with his approach to the region, and doubts about Washington’s commitment to their security.

Most of the Gulf Arab monarchies have in private been sorely disappointed by Obama’s presidency, regarding it as a period in which the United States has pulled back from the region, giving more space to their arch rival Iran to expand its influence.

Obama met for two hours with Salman and a group of top princes and officials at the opulent Erga palace, a meeting that had been forecast to be awkward.

Obama was recently quoted in a US magazine interview commenting on the “complicated” nature of the US-Saudi relationship, and describing some some Gulf and European states as “free riders” who called for US action without doing enough themselves.

The White House said the leaders exchanged views on a series of regional conflicts where the allies disagree, and also explored US concerns about Saudi human rights issues.

“The two leaders reaffirmed the historic friendship and deep strategic partnership between the United States and Saudi Arabia,” the White House said in a statement.

Obama has spoken of his desire to persuade Gulf states to arrive at a “cold peace” with Iran that would douse sectarian tensions and allow all sides to focus on what he sees as a greater threat emanating from Islamic State.

“More broadly, the president and King discussed the challenges posed by Iran’s provocative activities in the region, agreeing on the importance of an inclusive approach to de-escalating regional conflicts,” the White House said.

Obama praised the king’s pledge of humanitarian aid to Yemen after a Saudi-led military campaign against the Iran-backed Houthi group – and talked about the need to help parts of Iraq hit hard by Islamic State fighting.

They also talked about the need to reinforce a cessation of hostilities between Syrian government and opposition forces, and their support for a political transition in the war-torn country, the White House said.

The White House did not say whether the leaders had discussed a bill proposed in the U.S. Congress that, if passed, could hold the kingdom responsible for any role in al Qaeda’s Sept. 11, 2001 attacks.

The attack was mounted by al Qaeda, then based in Afghanistan. Fifteen of the 19 hijackers were Saudi nationals, although no US investigation to date has reported finding evidence of Saudi government support for the attacks.

Obama has said he opposes the bill because it could expose the United States to lawsuits from citizens of other countries.

Obama arrived too late for the pomp of a televised official welcome for Gulf rulers at the airport, making a low-key entrance before being whisked off by helicopter to the palace.

He later met privately at his hotel with Abu Dhabi’s crown prince Sheikh Mohammed bin Zayed al-Nahayan and discussed the need to find a political settlement for the Yemen conflict, and to head off the “actions of potential spoilers” for Libya’s nascent government.

Earlier, US Defence Secretary Ash Carter had talks with his Gulf Arab counterparts on ways of countering Iranian influence and fighting the Islamic State group.

They agreed on joint cooperation towards improving Gulf missile defence, special forces and maritime security, but no new deals were announced.

The GCC secretary general said the bloc and the United States would stage joint maritime patrols to stop weapons smuggling to Iran. American officials said these were already taking place and did not represent a new step.

On Thursday, Obama will attend a summit of the Gulf Cooperation Council (GCC), a group of monarchies comprising Saudi Arabia, Kuwait, Qatar, Bahrain, the United Arab Emirates and Oman.

Apart from Oman, they are ruled by Sunni Muslim dynasties who see revolutionary, Shi’ite Iran as a threat to their security and say its involvement in Iraq, Syria, Lebanon and Yemen has fuelled conflict and deepened sectarian divisions.

“Hezbollah is shining in the Muslim world. It doesn’t matter if a corrupt, dependent and hollow government with the use of petrodollars condemns it in a statement. To hell with it,” he wrote.

The White House shares the view of Gulf Arab states that Tehran plays a destabilising role, but its push for the nuclear deal Iran agreed with world powers last year caused fears in Riyadh that Washington was not listening to their concerns.