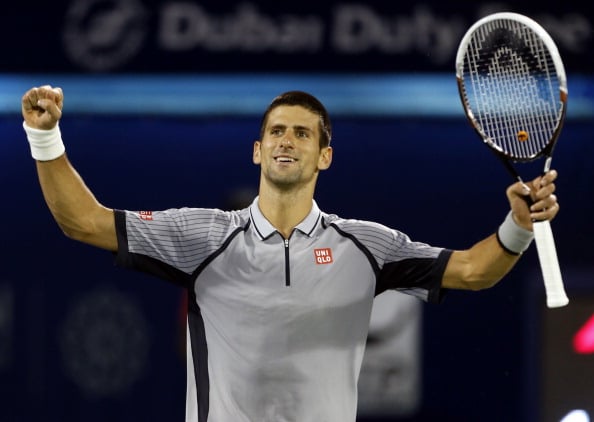 Novak Djokovic extended his winning streak to 18 matches to claim a fourth Dubai Championships in five years on Saturday, underlining his status as the world’s best player after beating Tomas Berdych 7-5 6-3 in the final.

The Serb is unbeaten since October, did not drop a set in Dubai and he has now won all 13 matches against top-10 opponents since Andy Murray defeated him in last year’s U.S. Open final.

“To prevail again, to be the last man standing  it was never going to be an easy final – Tomas is a fantastic player and it could have gone either way,” Djokovic said in a courtside interview.

Ultimately, the 25-year-old won because he took his chances, converting three break points out of four, while Berdych only managed to make one of his five count.

Yet it was the Czech who started the stronger, belying a 12-1 losing record against Djokovic as the world number six dropped only four points in his opening three services games.

Berdych, who saved three match points before beating Roger Federer in Friday’s semis, also made the first break of the final, bypassing an onrushing Djokovic with a running lob winner into the corner for a 3-2 lead.

The crowd, stunned their hero had faltered, bellowed Djokovic’s name and the six-times grand slam champion responded with a change of tactics, retreating to the baseline as he dug in against the Berdych onslaught.

Djokovic looked anguished after a cross-court backhand drifted long, his shoulders drooping to reveal just what a struggle he had in putting any pressure on Berdych.

But that image proved illusory and the Czech, who was initially so at ease on serve, wilted under the power, precision and variety of his opponent’s ground strokes.

Berdych missed an easy volley from mid-court that would have delivered a 5-3 lead and then repeated the blunder moments later to give Djokovic a break back for 4-4.

“I was giving him too much time to control the points – that resulted with a break down,” Djokovic told reporters.

“I fight and believe I can come back – that’s something that can eventually decide the winner in these kinds of matches, just hanging in there, waiting for your chance and then going for it.”

Berdych could have made immediate amends, but he missed three break points in the next game to reveal a weakness around the net.

At 6-5 behind, Berdych then double-faulted to gift Djokovic the set.

“I had a break, but playing with the best returning guy on tour, it’s an advantage but not something really huge,” Berdych told reporters, adding the pressure Djokovic put on his serve was mentally and physically draining.

The Czech was playing a ninth match in 11 days, having lost the final of Marseille Open to Jo-Wilfried Tsonga on Sunday, and that punishing schedule eventually told.

Djokovic was rarely troubled in the second set and needed only one chance to take a decisive lead 5-3 lead, clinching the title with a flat forehand into the corner.