Nothing Is Going To Stop Us Now - Gulf Business 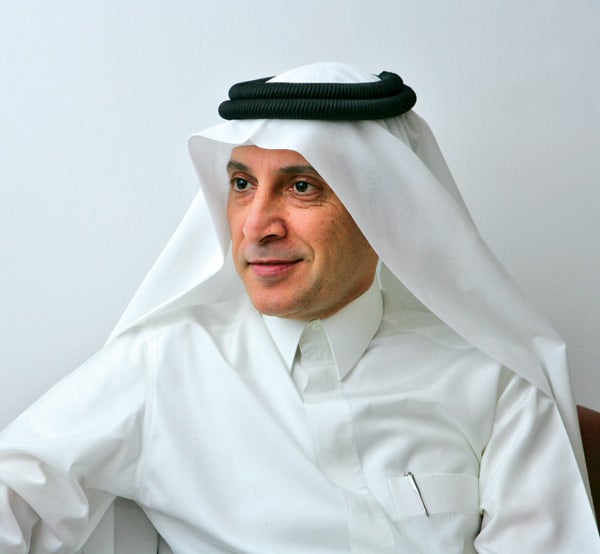 It’s no surprise that Akbar Al Baker likes to unwind by “sitting in the office”. When he relaunched Qatar Airways in 1997, the airline operated just four planes.

Today the CEO runs afleet of 97 aircraft, with orders for over 170 more – including five Airbus A380s, the largest planes on earth.

Al Baker cuts a slight frame as he walks through the Arabian Travel Market crowds, trailed by a gaggle of hangers-on and flunkies.

After all, this is the man who runs the second largest airline in the Gulf, and forms a part of the ‘superconnector’ trio, along with Emirates and Etihad, much to the chagrin of the West.

Just don’t tell Al Baker. After months of publicly slinging mud at Air Canada and Lufthansa, the mere mention of the West’s accusation of Gulf fuel subsidies sends him off into a fever-pitched diatribe.

“They are inefficient airlines, so they shouldn’t blame other people. They think that we are getting government subsidies, but we are not,” the Qatari tells Gulf Business.

After decades of protectionism, code sharing and coddling air routes, the West is right to be shell-shocked by the rapid rise of the Gulf’s airlines.

But Qatar Airways, like its formidable Gulf peers, is no flash in the pan, and is driven by a shrewd strategy from an even shrewder mind. Al Baker says he will stop at nothing to be the best airline in the world – across commercial, private jets and cargo. In just a year from now, the CEO will be receiving an aeroplane“every 15 days”.

And the diatribe continues: “Lufthansa became private only 19 years ago; before that, for 70 years, they were a state instrument. It was getting all its cash requirements, and it was always losing, the airline nearly went bankrupt in 1991. British Airways was the same, until it was privatised and wrote off $14 billion. The American airlines get Chapter 11 protection. But if I go bankrupt (after the IPO), the state won’t support me, so what’s the problem?”

“(Western airlines) have a very high cost base and their governments are making it difficult for them because they close airports at 10pm and open them at 5am. They should blame themselves.

“Once their governments do for them what they do for us because we are economic instruments of our country,then we will have a level playing field.”

While Qatar Airways – owned 50 per cent by the Qatar Investment Authority, the country’s sovereign wealth fund, and 50 per cent privately – claims not to be given direct financial support, Qatari ruler Sheikh Hamad bin Khalifa Al Thani, like his UAE counterparts, views the national airline as the lifeblood for his vision of economic diversity and sustainability.

“Build it and they will come,” said Sheikh Mohammed, UAE vice president, Prime Minister and ruler
of Dubai, when creating Emirates airline. Qatar Airways and the UAE national carrier, Etihad, were not far behind in grasping the reality of his sentiment.

Like the other major Gulf airlines, Qatar Airways is following a strategy of tapping into markets that have been neglected by Western markets and are consequently relying on inefficient hubs in their regions.

“We see growth for the entire Qatar Airways global network – not from any one particular concentrated area – because Qatar Airway’s strategy is not to focus on one area. If there is any international turmoil, we want to spread the impact, so it doesn’t affect us.”

Despite experiencing a revenue drop of six per cent due to the regional uprisings earlier this year, the CEO claims Qatar Airways is “expecting a higher profit this year to the end of March 2011. We are also expecting profits the year after,” he says.

The airline has previously said it made a $205 million profit in the financial year 2009 – 2010 and is expecting $250 million for the following year. In December, the firm said it planned to launch an initial public offering (IPO) in early 2012 after three consecutive years of profit.

Overall Middle East passenger growth slowed around two per cent between February and March due to the unrest, according to International Association of Air Travel (IATA). On a future view, Air Transport Intelligence (ATI) predicted that Qatar Airways will carry almost 70 million passengers annually by 2020.

But it’s not the long-term figures Al Baker is worried about.

“The biggest threat to my profits is the oil price. My biggest worry is the regional conflict, if it gets worse then my business will be severely hurt, and the global aviation industry will be hurt,” he says.

“You can’t pass on all costs to the customers as they will be paying 15 per cent every month additionally. Unfortunately, we have to (absorb the cost), we can only recover a small fraction from our passengers.”

For a man who likes to think big, another major concern has been delayed plane orders. Al Baker has been one of the most vocal critics of 787 delays – saying last year that Boeing would be in for a ‘serious surprise’ if they continued the delays.

With over 170 craft on order – including 80 Airbus A350s, 60 Boeing 787s, 12 Boeing 777s and five Airbus A380s – the first 787 delivery is already a year late for Qatar Airways and, considering that Boeing is currently around two years late with all its customers orders, this would indicate a 2013 timeframe. Today, however, Al Baker has regained confidence in the blighted aircraft-maker.

“We are expecting more than 120 planes in the next two and a half years. We now have firm dates of delivery for the 787s, though the deliveries were delayed due to technical issues in the past and production delays, this has now been overcome,” says Al Baker.

“Boeing is also imminently going to start a second production facility on the East Coast so we think that there will be a ramp up of production and Qatar Airways will receive aeroplanes earlier than stated to us in the revised delivery schedule.”

Just last month, the CEO confirmed to journalists that he expects to sign a deal for a 33 per cent stake in European all-cargo airline Cargolux in a few weeks. The stake in the ninth largest freight company globally will lend Qatar Airways considerable extra grip in the global cargo market.

While Al Baker’s warehouse at Doha International Airport has capacity to handle around 400,000 tonnes of cargo annually, Cargolux handled 652 million tonnes in 2009.

“It is the right time because the whole business has rebounded and Qatar Airways wants to play a very important role in air cargo. Cargolux is very well established and a strong airline,” says the CEO.

“The synergies are appropriate, we want to be a global player.”

Another crucial peg in Al Baker’s plan is the private jet market. The firm plans to double its all-Bombardier fleet to six aircraft by the end of August this year. The incoming deliveries include a Bombardier XRS in May, followed by a Challenger 605 and a Global 5000.

These planes will be housed in a handsome new 6,300 square metres hangar facility. Which brings us to another gripe from Western critics: the plethora of shiny, new infrastructure that’s cropping up and supporting the Gulf’s shiny, new planes.

The $14.5 billion New Doha International Airport – based in Qatar’s capital, Doha – is Al Baker’s self-professed “favourite subject” and another of the airline’s related projects directly under his control.

The facility, delayed by two years, is now set to open by 2012 with a capacity of 24 million passengers
a year, rising to twice that in 2015. What will happen to the airline’s old facility?

“Why, you want to buy it?” he asks, with a smile – testament to a sense of humour lurking beyond his steely ambition. “It will be demolished,” he says, “to make way for commercial and office space.

“The new airport is due to be complete at the end of 2012 and will be operational after that. We will make sure that we have tested all the systems six to eight months before we open the gates for full operation.

“For example, cargo will be partly functional this year in July so, part by part, we will take over sections of the airport. The air traffic systems will also be completed before the end of the year. Cargo facilities will be complete by the end of the year,” he adds, clearly proud of what such a mammoth-sized project means for the future capabilities of his country.

“I didn’t achieve anything – I just did my job, which was to have a successful airline. I love all the jobs that are given to me by my government because I serve my country. I have always been in a position of responsibility,” he says.

“You don’t call this power; you call this the freedom to do your job the way you like, without outside interference, as long as you deliver.”

The new airport and Qatar Airways represents just part of a grander master plan for Qatar’s development by 2030. In addition to growing its air transport capacity, the country is spending hundreds of billions of dollars on power, infrastructure, real estate and education.

Last year, the small but boisterous Emir state boasted 19.4 per cent GDP growth – number one in the world. And there is, of course, the football World Cup to provide for in just over a decade, “The PR value of the World Cup in 2022 is immense and every country that has achieved this so far has leveraged this PR opportunity to show many things that the country would want to portray. This is an opportunity that Qatar will take seriously and in a very successful way,” the CEO says.

And with that, he’s off. “Have I got any more interviews today?” he asks his PR team. Media-friendly Al Baker is clever enough to know that image – along with putting your struggling rivals straight from time to time – means everything.