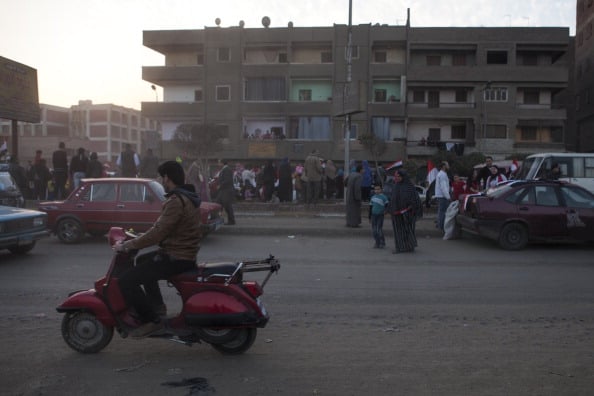 North Africa has been one of the Gulf’s favourite investing grounds for decades, but its allure has dimmed as political uncertainty has swept the region.

North African states like Egypt, Tunisia and Libya have seen their old guards toppled, but instead of political and economic liberalisation, all three states have been weighed down by political infighting and remain rudderless as their economies muddle through uncertain conditions.

“In Egypt, the transition has progressed in fits and starts and the outlook remains uncertain,” notes the Institute of International Finance in its recent report.

“In Libya, the continued presence of militias and tribal differences are complicating the transitions there while in Tunisia, which has remained relatively free of armed conflict, internal political tensions continue to slow progress towards consensus-based democratic rule.”

As such hard-nosed investments from the Gulf States have mutated into aids, loans and handouts.

Egypt has been the biggest beneficiary of the Gulf States’ generosity. As the Egyptian army toppled the Muslim Brotherhood government in the summer, Saudi Arabia, Kuwait and the UAE pledged funds to ensure the economy remains afloat.

The $12 billion of support from the three Gulf countries has stabilised Egypt’s macro outlook, secured its external financing needs for at least six months, and supported a 1.5 per cent of GDP fiscal stimulus, says Alia Moubayed, an analyst at Barclays Capital.

“However, a potential ban on the MB’s [Muslim Brotherhood] activities and crackdown on its leadership, will keep volatility elevated. We believe the target deficit of 10 per cent this fiscal year is optimistic and expect monetary policy
to remain accommodative.”

The country has already received $7 billion of the funds leading to the strengthening of the Egyptian pound. So much so, that the United States’ decision to cut a portion of its aid, worth $260 million, did little to dampen investor sentiment.

But these GCC funds are distinct from those in previous years when Gulf corporates bought up telecom companies, invested in real estate and set up shopping malls in the country.

Emaar Properties Chairman Mohammad Ali Alabbar says the company is in a “wait-and-see mode” in Egypt. “Libya needs time to breathe and organise itself, but I hope it doesn’t take them too long,” he told the media.

Nevertheless, Emaar is working on three Egyptian projects, including the $2.1 billion Uptown Cairo project, the $1.74 billion Marassi Project located on the north coast at Sidi Abdel-Rahman and the $1 billion Mivida Project in New Cairo.

The company is also working on an $820 million Cairo Gate project in a joint venture with fellow UAE company Al Futtaim Group.

The retail group itself is working on a $1.45 billion Cairo Festival City. While UAE rival Majid Al Futtaim’s $400 million Mall of Egypt is also under way.

But a number of the Gulf projects in North Africa are either being delayed or put on hold due to a range of issues including economic and political uncertainty.

These include Damac Properties’ $16.3 billion Gamsha Bay project in Egypt, and a $5 billion aluminium smelter complex proposed by Abu Dhabi’s Mubadala, Dubal and Algerian state-owned enterprise Sonatrach as far back as 2007.

While North Africa remains in turmoil, the long-term prospects of the countries, especially Egypt and Libya, are very positive.

Egypt, the Arab World’s most populated country, remains on the radar of Gulf and international investors, not just for its demographic advantages but also the strength of its infrastructure, labour skills and unique tourism opportunities. Its financial services industry and regulatory infrastructure remains welcoming, although the current turmoil is slowly chipping
away at its strengths.

“Among the non-oil countries, Egypt, as the largest country and the cultural and historical heavy-weight in the MENA region, remains a keystone state for the future of the region as a whole,” says the IIF.

“At the geostrategic level, the recent realignment of the new regime in Cairo with the broader interests of the three largest GCC countries is supportive for political regional stability.”

The IMF expects the country’s GDP to grow 3.3 per cent in fiscal year 2013/14, especially if the authorities implement corrective policies that can help restore confidence and usher in investment. The growth is in sharp contrast to the less than two percent range GDP expansion over the past three years.

Beyond the current political turmoil, Egypt offers a breadth of opportunities for intrepid Gulf and regional investors. For example, the country has an acute shortage of affordable housing that remains largely unaddressed.

Egypt’s tourism industry also needs a fresh injection of confidence and investment. The country’s unique tourism proposition has suffered during the Muslim Brotherhood government. Egyptian newspaper El-Masry Al-Youm recently reported that around 86 of the 248 Red Sea Governorate hotels have closed since the political troubles began.

Shaker Abdel Azim, a board member of one of the tourist villages in Sharm el-Sheikh, says that as many as 35,000 Egyptians have lost their job as hotels closed down.

Indeed, tourism receipts have also fallen from $12.5 billion in 2010 to $9.9 billion in 2012, according to the United Nations World Tourism Organisation.

However, some stability and investor confidence could bring tourists back to the region. The Egyptian Hotel Association notes that at least 29 hotels with nearly 8,000 hotel rooms are under development in Cairo alone.

Gulf companies are especially adept at developing luxurious tourism fronts, and with the right incentives could return to Egyptian shores.

In September, BP announced that it made a significant natural gas discovery offshore of Egypt, as part of its pledge to invest $11 billion in natural gas projects in the country.

“Until and unless there is clarity on the political front and closure on the constitutional and legal framework, one is hard-pressed to see a major pickup in investment and economic activity, both necessary to reduce the high unemployment,” the IIF says.

In June, the IMF approved a two-year $1.75 billion stand-by arrangement, but beyond that foreign capital is sitting on the sidelines, waiting for a break in the deadlock.

In contrast to the more developed North African nations, Libya is a blank canvas offering a whole host of opportunities to build the country from the ground up. The county’s infrastructure needs are immense which could interest regional construction companies such as Arabtec, Drake & Scull International, along with major developers such as Emaar, Nakheel and Aldar Properties.

Libya’s total foreign assets are currently estimated at $158 billion, equivalent to six years of import cover and more than twice the GDP, which suggests that the country may have little trouble in financing the nation-building projects as long as it can maintain some semblance of peace.

“The issue of financing future activities of a new government when established is therefore not likely to pose difficulties,” says the IIF.

Morocco and Algeria, the two countries that have successfully avoided a regime- change to date, also remain embattled.
Algeria’s ailing President Abdel Aziz Bouteflika has decided to run for a fourth-term in April amid growing signs of dissent in the country.

While Algeria remains in reasonable economic health due to its oil and natural gas production, it is in need of a major overhaul and fresh ideas.

To add to the foreign investor wariness, the country was rocked earlier this year when terrorists attacked a natural gas facility in Amenas. The attack on the facility, owned by UK-based BP and Norwegian firm Statoil, could have severe repercussions on future investment in the country.

This would be a blow for the Algerian authorities, as the sector desperately needs a fresh injection of capital.

“Stagnant crude oil and natural gas production is expected to limit economic growth over the next 12 months,” says risk and management consultancy Maplecroft in a recent report on the country.

However, a new hydrocarbon law could attract oil majors to the country, which has the second largest oil reserves in Africa, after Nigeria.

Algeria is the fourth largest natural gas exporter to Europe, but production has steadily declined since 2005 as the country’s large and mature fields are depleting, says the US Department of Energy.

“There are a host of new projects planned to come on line, but they have repeatedly been delayed, and some are dependent on the construction of new infrastructure,” the Department says.

Beyond Algeria’s energy sector, prospects remain bleak as reflected in the country’s 153rd ranking in the World Bank’s Doing Business survey out of 189 countries.

In sharp contrast, oil-importing Morocco is expected to emerge as the best-performing North African economy this year (with the exception of the Libyan economy, which is driven by volatile oil production).

Moroccan authorities moved quickly to initiate political and social reforms during the early days of the Arab Spring, but the economy was still hit due to a crippling recession in its major trading partner the European Union and instability in neighbouring countries.

The kingdom held elections in November 2011 and ushered the Islamist Justice and Development party into power, although ruler King Mohamed VI continues to wield ultimate control.

In October, King Mohamed appointed 19 new ministers after agreeing a new deal with Prime Minister Abdelillah Benkirane, to weaken the rule of Islamic parties and their quest to push through unpopular reforms.

The Gulf Co-operation Council also made overtures to Morocco to join its six-nation union in the early days of Arab Spring to bolster its own defences, but not much progress appears to have been made to move this agenda forward.

North Africa has traditionally been Africa’s investment magnet, but the deterioration of its collective economy has been exacerbated by the rising prospects that have presented themselves in Sub-Saharan Africa.

Gulf funds such as Abraaj Capital are scouring places like Ghana, Uganda and Tanzania, while oil majors are making a beeline for Mozambique, Angola and Kenya as they find more flexible and business-friendly propositions in the fast- growing Sub-Saharan economies.

North African states will have to move quickly to wrest back the initiative and investments from the competing Sub- Saharan region.