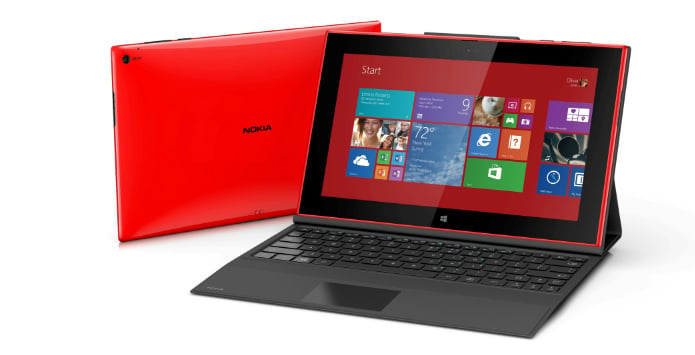 In a mega event in Abu Dhabi on Tuesday, Nokia unveiled six new devices, including its first Windows tablet, the Lumia 2520, and two large screen Lumia smartphones: the Lumia 1520 and 1320.

The Lumia 2520 includes a 10.1-inch HD display, a 6.7MP camera with ZEISS optics and offers both 4G LTE and Wi-Fi connectivity. It runs on Windows RT 8.1 and features fast-charging capability – providing up to an 80 per cent charge in one hour.

The tablet pairs with the $149 Nokia Power Keyboard, a functional keypad with gesture trackpad which comes with five extra hours of battery life and two built-in USB ports.

The Lumia 2520 will be available in red and white in a glossy finish and cyan and black in a matte finish, and is expect to start shipping in Q4 2013 with an estimated price of $499 before taxes, the Finnish company said in a statement.

Initial roll out will begin in the US, U.K and Finland, it said.

The 1520 includes a 20MP PureView camera, a 1080p full HD display and Nokia Rich Recording, an audio capture tool. The phone, priced at around $749 before taxes, is expected to be available from Q4 2013 and comes in yellow, white, black and glossy red. Initial launch locations include: Hong Kong, Singapore, U.S., China, U.K., France, Germany, Finland and other European markets.

The 1320, available in orange, yellow, white, and black, features a 720p display, Nokia Music and HERE maps. It is expected to start shipping in Q1 2014 with an estimated price of $339 before taxes in China and Vietnam, followed by other Asian markets, India and Europe.

Nokia also unveiled the Asha 500, Asha 502 and Asha 503 smartphones that come with a new crystal-clear design and a faster user interface.

The phones will be available in bright red, bright green, yellow, cyan, white and black, and are slated for release in Q4 2013.

“Now more than ever, mobile devices are at the center of consumers’ lives as they look to capture, curate and share experiences on the go,” said Stephen Elop, executive vice president, Devices & Services at Nokia.

“Today we’re inviting people around the world to switch to Nokia. With our latest range of Lumia and Asha products, we’re delivering industry leading design and imaging innovation to bigger devices at more accessible prices. The quality and value that Nokia products deliver continues to grow as we partner with developers to introduce app experiences that are unique to Lumia and Windows Phone.”