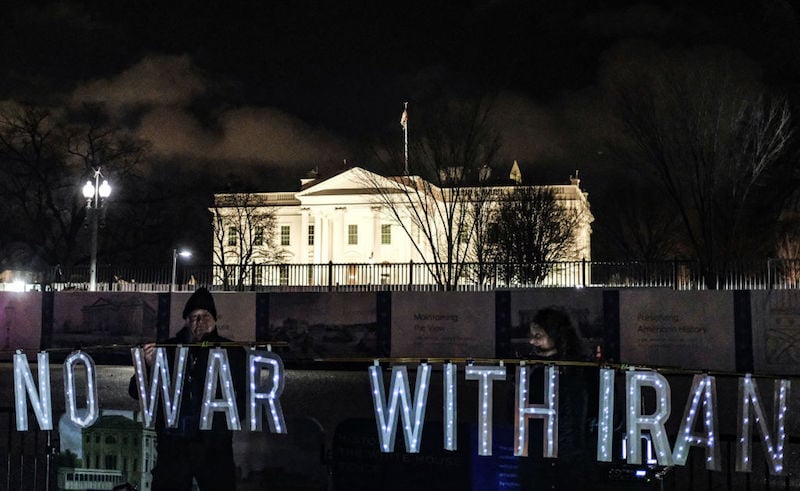 Iran on Wednesday fired missiles at airbases jointly used by the US and Iraq in retaliation for the killing of General Qassem Soleimani, roiling financial markets and disrupting air traffic but causing no casualties.

There were no American casualties in Iranian missile strikes targeting bases in Iraq that hosted US and Iraqi soldiers, a US official said, asking not to be named because the information hasn’t yet been made public.

The attacks used guided missiles and in this instance, Iran appeared to be shooting to miss, the official said. The U.K. said there were no British casualties either.

Retribution had been expected for the deadly drone strike last week, but Iraq said it had received verbal notice from the Iranians prior to the strikes. With no Americans killed, expectations of an immediate escalation in the oil-exporting region appeared to recede.

President Donald Trump tweeted “All is well!” while battle damage assessments continued. Airlines changed routes to avoid the conflict zone, and the US Federal Aviation Authority restricted flights over the Gulf.

Here is a rundown of major events since Tuesday:

* Iran retaliates against US in rocket attack on Iraqi bases

New US Sanctions Most Likely to Hit Metals Sector
President Donald Trump on Wednesday vowed more sanctions on Iran as part of his “maximum pressure” campaign against the Islamic Republic. Those penalties are likely to target key regime figures and the country’s metals sector, according to a person familiar with US plans to keep squeezing Iran’s economy following the killing of Soleimani.

The sanctions will likely be aimed at non-oil sectors of the Iranian economy and fit into a previously disclosed administration plan to choke off other sources of revenue now that the US has clamped down on the country’s oil exports, said the person, who asked not to be identified discussing private deliberations.

Pentagon Says Iran Fired With Intent to Kill Troops
US Joint Chiefs of Staff Chairman Mark Milley said Iran targeted personnel with intent to kill in its strike on two bases in Iraq, and that it’s too early to tell what the Islamic Republic will do next.

Defense Secretary Mark Esper, briefing reporters at the Pentagon alongside Milley, said 16 Iranian missiles were launched from three sites in the country and that a US warning system gave American forces in Iraq time to protect personnel. Esper said he expects Shiite militias to still target US forces.

The Pentagon chief also said he has no information on whether Iran shot down the Boeing jet that crashed near Tehran the same night as the missile barrage in Iraq.

Two Republicans Rip Administration Over Briefing
Republican Senators Mike Lee and Rand Paul, two libertarian-leaning lawmakers, ripped the administration’s briefing on its strike against an Iranian official as inadequate and said the administration must get authorisation from Congress before taking any further military action.

Lee, of Utah, called it the worst briefing on military affairs he’s heard since coming to Congress and said it was “insulting” to lawmakers who wanted to understand President Donald Trump’s strategy. As a result, he said he’ll back a Democratic-sponsored resolution to limit Trump’s options to take military action.

“That briefing changed my mind,” Lee said. “After today, every time they pull a stunt like this, I’m willing to consider and introduce any and every war powers act resolution.”

Paul, of Kentucky, said he considers himself a Trump supporter but that debate about a president’s authority to wage war is bigger than this administration or this president. He said he also would vote for the resolution sponsored by Virginia Democratic Senator Tim Kaine that would require the president to cease military actions against Iran unless authorised by Congress or in response to an imminent threat.

Their remarks stood in stark contrast to the reactions of most other Republicans following a briefing by Secretary of State Michael Pompeo and other administration officials. Senator James Risch of Idaho called it “one of the best briefings” he’s gotten at the Capitol.

Republicans, Democrats Feud Over Soleimani Threat
Republicans and Democrats in the US Congress had starkly different interpretations of the classified briefing from Trump administration officials to justify the strike that killed Soleimani.

The justification was “sophomoric,” according to House Foreign Affairs Committee Democrat Gerald Connolly. He said the explanation centered on the president’s constitutional authority to respond to imminent threats and the 2002 Authorization for the Use of Military Force in Iraq.

Representative Mark Meadows, a Republican from North Carolina, said he was satisfied by the administration’s justification, backed by intelligence presented by CIA Director Gina Haspel. He said Haspel’s information was exhaustive and contained “numerous” multiple potential threats and reasons why the action “was necessary.”

Meadows said Soleimani will “not be easily replaceable,” and “some of his operational abilities will take months if not years to replace.”

Trump Says Iran Appears to Be Standing Down
Trump said Iran appears to be refraining from additional strikes against US targets, calling it a “good thing” for both nations and the world.

“Iran appears to be standing down, which is a good thing for all parties concerned,” Trump said in an address from the Grand Foyer in the White House.

“The American people should be extremely grateful and happy. No Americans were harmed” in the attacks, Trump said.

Trump said he would impose additional economic sanctions on Iran and would keep the measures in place until the Islamic Republic becomes less bellicose toward the US. He said he would ask NATO to become more involved in the Mideast, without elaboration.

Trump to Give Iran Address at 11am
Trump will speak to the American people at 11am Washington time from the White House on Wednesday to address the confrontation with Iran, the administration said.

The speech marks the president’s most significant foreign policy remarks of his tenure as tensions in the region simmer.

In the hours after the Iranian strikes, Trump sent a message of reassurance, saying in a tweet, “All is well!”

Putin and Erdogan Urge De-Escalation
Russia’s President Vladimir Putin traveled to Istanbul on Wednesday to meet with his Turkish counterpart Recep Tayyip Erdogan. They issued a joint statement urging the US and Iran “to act with restraint, with common sense and with priority given to diplomatic means.”

“We believe that the exchange of strikes and the use of force by either side do not contribute to the search for solutions to the complex problems of the Middle East and lead to a new round of instability, not responding to anyone’s interests,” they said in the statement.

The attacks used guided missiles and in this instance, Iran appeared to have intentionally aimed the strikes away from Americans on the base, the official said.

No British Troops Injured, Says Johnson
Prime Minister Boris Johnson said no British troops had been injured in last night’s attack. Answering questions in Parliament, he urged de-escalation in the region, but added that the question of the legality of killing Soleimani was one for the US.

“The US has a right to protect its bases and its personnel,” Johnson said. Pushed by opposition Labour Leader Jeremy Corbyn, Johnson said Soleimani had armed terrorist groups, including those who attacked British soldiers. “That man had the blood of British soldiers on his hands,” he said.

Petrobras, Bahri, other tanker companies suspend sailing through the Straits of Hormuz, Dow Jones reported, citing unidentified people familiar with the matter. The decision comes after the Iranian strike raised concerns of a military escalation in the oil-exporting region.

Lufthansa has suspended flights over Iraqi and Iranian airspace in the wake of the missile strikes, a spokesman said by phone. Lufthansa also canceled a flight from Frankfurt to Tehran.

Iran’s Zarif Says He Has No Statistic on Attack Fatalities

Iranian Foreign Minister Jawad Zarif doesn’t have any statistics on fatalities in the Iranian attacks on U.S. targets in Iraq, he told reporters in comments broadcast on TV. Zarif said he’s sent a message to the Americans “immediately after the attack” but did not elaborate on its contents.

Iranian Supreme Leader Ayatollah Ali Khamenei said in a televised address on Wednesday that his country had given the U.S. a “crushing response” to the killing of Soleimani and called for an end to the U.S. presence in the region.

“Turkey is one of few countries and probably the most important one that can speak both with the U.S. and Iran,” Erdogan spokesman Ibrahim Kalin said after a cabinet meeting late Tuesday.

Oil and gold both rose while equities fell immediately on the news that Iran launched missiles against American targets as investors looked for a safe haven. But stocks in Asia pared losses and crude came off highs after Iran assured its strike didn’t mean it was seeking war, and President Trump declared, “All is well!”

Gold surged above $1,600 an ounce for the first time in more than six years but gains moderated as calm returned.

UAE hopes that there is no further escalation in the region, Energy Minister Suhail Al Mazrouei told reporters in Abu Dhabi.

“We are hoping the wisdom of both sides will de-escalate the tension,” Al Mazrouei said, adding that he’s not concerned about oil supplies.

US Restricts Flights Over Gulf

The effect of the restrictions wasn’t immediately clear because the Federal Aviation Administration had been prohibiting U.S. carriers from flying over most of those areas.

“The FAA will continue closely monitoring events in the Middle East,” the agency said in a statement. “We continue coordinating with our national security partners and sharing information with U.S. air carriers and foreign civil aviation authorities.”