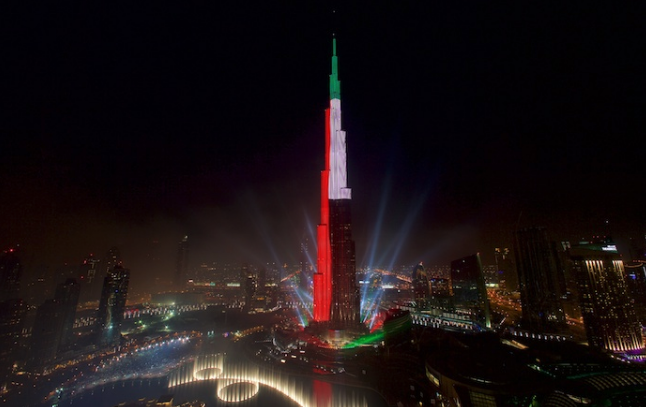 The annual fireworks display on New Year’s Eve at the world’s tallest tower Burj Khalifa will include an eight-act display this year with LED lights and 3D effects.

The show will present the ‘futuristic vision’ of the United Arab Emirates, developer Emaar revealed in a statement. Elaborate preparations are on to host the throng of visitors expected to witness the Downtown Dubai NYE gala, it added.

As part of this year’s event, Burj Khalifa’s 828-metre high façade will have some 357,000 LED nodes lit up to highlight a number of themes including a tribute to the UAE.

Two minutes preceding the countdown, a ballet of light will also create designed patterns on the façade of The Dubai Mall. A visual depiction of a giant sand hourglass with 12 engravings for each month of 2015 will mark the passage of time, Emaar said.

As part of the show, Burj Khalifa will also assume the form of a digital flower led by the multiple LED displays.

The countdown and the display to welcome 2016 will see a crescendo of fireworks, light beams and LED displays illuminating Downtown Dubai to make it “one of the brightest spots on earth”.

The spectacle will end with the UAE flag unfurling from the pinnacle of Burj Khalifa.

Managing director of Emaar Properties Ahmad Al Matrooshi said: “The flagship celebratory event of Emaar, the Downtown Dubai New Year’s Eve gala has become one of the world’s most-watched spectacle with hundreds of thousands of visitors coming to Downtown Dubai and the event being live broadcast on television across the world as well as live-streamed online.

“By welcoming the world to join us in the festivities, the event energises the city’s economy catalysing all its core sectors. With various governmental departments and the private sector joining hands to realise this event, the celebration serves as a true testament to the spirit of cooperation.”

The event will be live-streamed for the fourth consecutive year onwww.mydowntowndubai.com. Online visitors can choose from three camera angles including a helicopter view of the spectacle.

The spectacle will be also broadcast live on the screens in Times Square, with the visuals of the crowds watching from New York City to be shown on the screens set up in Downtown Dubai.

Several viewing points are being set up for visitors and vehicular traffic to the venue will be streamlined. Emaar urged visitors to take the Dubai Metro and access Downtown Dubai via the travellator that links it with the Burj Khalifa/The Dubai Mall Metro Station. The station is expected to be closed by 10pm.

One of the most-watched NYE events across the globe, the gala last year clinched the Guinness World Records title for the ‘world’s largest LED-illuminated façade’ on Burj Khalifa. The display welcoming 2015 also included over 4.7 tonnes of fireworks with 25,000 shots lighting up the sky.