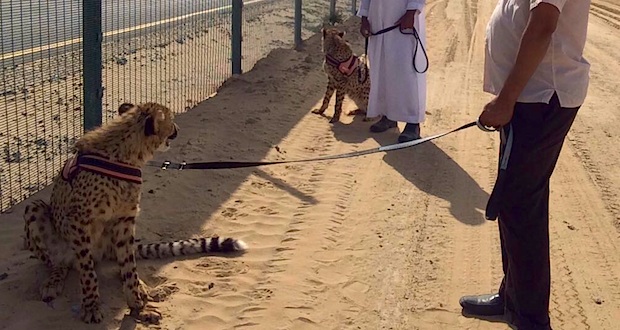 A new draft law passed by the United Arab Emirates’ Federal National Council (FNC) has proposed a ban on the ownership of wild and exotic animals in the country.

It ahs called for dog owners to buy a licence for their pets and keep them on a leash at all times in public.

The law, which was discussed by the FNC on Wednesday, also makes it mandatory for pet owners to vaccinate their dogs against dangerous diseases.

Failure to keep their dogs under control or to get appropriate vaccinations could result in fines up to Dhs 500,000. Further penalties could include six months in jail for the dog owners and the confiscation of the pet.

Pet owners will be given six months from the date that the law comes into action, which has not yet been released, to buy the necessary licence and vaccination.

The law follows a ruling made in November 2014 by Sharjah’s ruler Sheikh Sultan bin Mohammed Al Qasimi, which prohibits people in the emirate from owning dangerous predators as pets.

The decision was reached after numerous reports were received of people raising illegally obtained and dangerous pets at their homes.

The ban on wild and exotic animal pets will aim to regulate the possession and trade of predatory and dangerous animals. The only places where such animals can be kept will include zoos, wildlife parks, circuses, breeding and research centres.

If seen in public with a leopard, cheetah or any other exotic animal, owners can face fines between Dhs 10,000 and Dhs 500,000.

Further fines will include up to Dhs 700,000 along with jail time for using an animal to threaten or intimate others. If a person is attacked and killed by an animal, the owner will face charges of manslaughter.

Members of society have expressed concerns regarding the wellbeing and appropriate re-homing of the exotic animals that will be confiscated. Many of these animals are currently being kept as pets in private collections, often times in villas and farms, all over the country.

With an influx of animals expected to be received by the authorities, Dr Thani Alzeyoudi, Minister of Environment and Climate Change has assured the FNC that preparations are well under way to accommodate and protect any unwanted creatures.

“We started last week working on this while coordinating with local parties to see what capacities we have to accommodate the number of wild animals that will be handed over,” he said.

During an amnesty at the end of 2014, animals including a lioness, hyenas, alligators, pythons, baboons, scorpions, spiders and lynx were handed over.

These animals, delivered to the Environment and Protected Areas Authority, were taken to the Sharjah Breeding Centre for Arabian Endangered Wildlife.