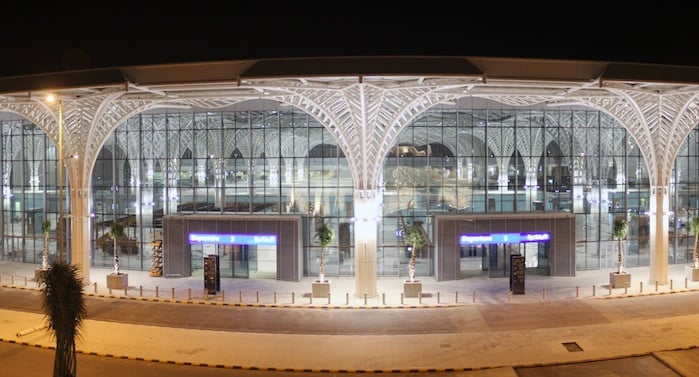 Saudi Arabia’s General Authority of Civil Aviation has confirmed that the first phase of a new bigger terminal has been opened at the Prince Mohammed Bin Abdul Aziz International Airport in Madinah.

The terminal will have 16 aircraft stands served by passenger boarding bridges and 20 remote apron stands. It also includes the implementation of a widened and extended runway with 10 km of taxiways capable of accommodating A380-size aircraft, a statement said.

The airport has six external terminals located within close proximity of the Hajj terminal, with a total area of 10,000 square meters and seating capacity of 4,000. It features local and international shops, restaurants and cafes, banking and transportation services including buses and taxis.

President of GACA Sulaiman Al-Hamdan said, “This new international airport is of strategic importance to Muslims all over the world – serving as the gateway to Madinah which is home to the second Haram Al Sharif, as well as to GACA – being the first of a series of new airports that we will open across the kingdom in an effort to build a sustainable and profitable modern airport system.

“The government is drawing up several efforts to increase its non-oil revenues and GACA is a leading contributor to these economic diversification efforts, driving the civil aviation industry’s growth through expansion, infrastructure development and privatisation.”

The first airport privatisation project in Saudi Arabia, the contract for it was awarded to the Tibah consortium through a build- operate and transfer agreement.

The consortium, which includes Istanbul’s TAV Airports, Al Rajhi and Saudi Oger appointed TAV Airports and ACC to design and construct the phase one facilities.

The value of the contract was approximately $1.2bn, the statement added.

Construction was completed in 30 months and the project is the first USGBC LEED gold certified airport terminal outside of the US and the first in the MENA.

Al-Hamdan added: “The focus of our recently rolled-out corporate strategy and plan is to transform Saudi Arabia’s aviation sector profitability and performance by encouraging foreign investments and privatising the management and operation of our airports. The new Madinah airport is the first in a series of airports that will be privatised to further elevate passenger services and experiences.”

Saudi Arabia is investing heavily in boosting its infrastructure in the cities of Mecca and Madinah to cope with the increasing numbers of religious tourists.

Apart from the expansion of the Madinah airport, the government is also developing high speed rail and metro projects in Makkah.