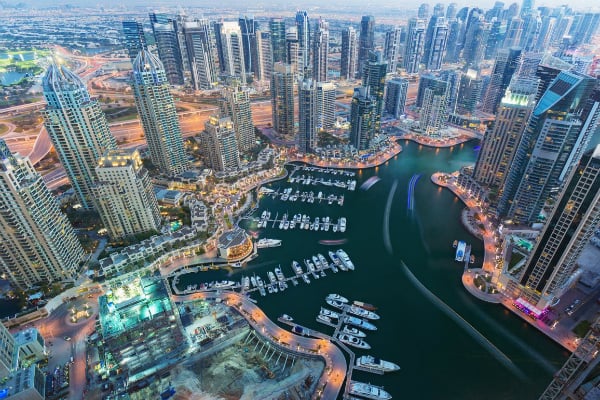 The luxury industry has faced a number of changes in recent years, not least here in the Gulf region. The world has seen rapid digital transformation and constantly-evolving consumer preferences and tastes, resulting in a new competitive landscape online that is continuously being challenged by varying economic trends. And yet, there remains hope for the market.

Overall, growth in the luxury goods industry will continue, as will those in other luxury segments (including cars and experiences). And while there remains apprehensive caution in the world of high-end luxury, the market continues to grow.

According to Bain & Company, the overall global luxury market grew by 5 per cent last year – now valued at Dhs4.96 trillion. Luxury cars, luxury hospitality and personal luxury goods together count for more than 80 per cent of that. While luxury products took a slight dive in 2018, the market was bolstered by cars (which grew at a steady 5 per cent from last year), gourmet food and fine dining (up 6 per cent) and luxury cruises (up 7 per cent).

The Middle East was not far off international standards of growth for personal luxury goods. The global market hit a high of Dhs1.01 trillion (a healthy 6 per cent growth year on year). Overall, it was shoes and jewelry that topped luxury growth categories – gaining 7 per cent each – followed by handbags and beauty. Watches remained flat, while apparel suffered.

In the Middle East, the slightly slower growth of around 3 percent was caused in part by geopolitical tensions and varying oil prices. That said, tourism has been a huge source of strong economic growth in the region, and Dubai remains one of the world’s top luxury destinations for Middle Eastern consumers, as well as for Chinese and European visitors.

While Dubai remains a leading city for luxury shopping, it’s not without its challenges. One of the main obstacles for growth over 2018 was retaining shoppers who would otherwise buy luxury goods elsewhere, mainly in the US or cities throughout Europe. There was also a large amount of competition in the city, which is only getting stronger as the online market continues to grow.

E-commerce has become a divisive factor in a region built on traditional in-mall luxury shopping. Its rapid growth has partnered with the fact that millennials in the Middle East are richer than the global average, and have more willingness to spend online. According to a report released by Mashreq Bank’s senior president and head of payments, Pankaj Kundra, there was a marked 48 per cent rise in online retail spending (compared to just 6 per cent consumer card spending) last year.

According to Kundra’s report, “While brick-and-mortar merchants have already expanded their product offering into the e-commerce space, this expansion may be at the cost of the cannibalisation of their traditional business, through the equivalent growth in their e-commerce channel.”

And it seems most of this growth is down to a few key players in the market: “The growth of e-commerce marketplaces, such as Souq and Noon, is encouraging increased confidence in buying online, which in turn is driving this growth,” added the report.

The growth of luxury online shopping in the region is almost double that of the rest of the world. According to Bain & Company’s annual luxury report, online shopping grew 22 per cent over the course of 2018. More importantly, it now represents 10 per cent of all luxury sales.

But that’s not to say the traditional luxury retail space need worry just yet. Swiss watches are a key indicator of how the industry is performing, and last year was a major boon for timepieces. 2018 saw the UAE rank first among Arab countries – and 10th globally – on the imports of luxury watches. The country imported Dhs3.36bn worth watches (an almost 2 per cent growth on the year before). Saudi Arabia ranked 13th, with imports amounting to Dhs1.25bn (5.9 per cent growth).

This will be good news for the region’s largest retailers. Landmark Group – one of the biggest retail and hospitality groups in the Middle East – will open its first Oasis Mall in Sharjah later this month. According to Aarti Jagtiani – group director of Landmark Group – this is all part of a wider strategy to capitalise on the region’s strong sales in traditional retail.

“We recently opened malls in Oman (Sohar) and Bahrain (Juffair) and now with the addition of this mall [in Sharjah], we are now expanding our footprint to 10 malls across four countries,” Jagtiani explains.

The group has said that, going forward, all its malls will be located in “vibrant communities to deliver an enjoyable experience to customers in both urban centres as well as satellite cities”.

Elsewhere, retail giant Majid Al Futtaim has begun a Dhs377m redevelopment of its first flagship, City Centre Deira in Dubai. Part of the upgrades will go towards making the mall more of an experience than ever before, says Fuad Mansoor Sharaf, managing director for Majid Al Futtaim Properties, Shopping Malls (for the UAE, Bahrain & Oman).

“City Centre Deira’s transformation project is a result of our customers’ changing habits and preferences. We want to develop a communal space that extends a feel-good factor with tailored, convenient and multisensory experiences,” he says.

The current trend in luxury is experiences

The UAE is a major spending hub in the region not just when it comes to luxury products, but luxury experiences. The overall market remained very attractive to consumers worldwide, illustrated by growth in luxury hospitality, and gourmet food and find dining (up five and six per cent respectively).

According to Simon Press, senior exhibition director at Arabian Travel Market, that trend shows no signs of slowing down, with both Saudi Arabia and the UAE expected to witness a significant increase in luxury hotel supply over the next few years.

“The opening of such iconic properties as Burj Al Arab in 1999 and Raffles Makkah Palace in 2010, changed the face of luxury tourism in the GCC, as well as the skylines of its major cities,” he says.

“The region may be working to attract a wider visitor mix, but its commitment to luxury hospitality and tourism will not take a back seat anytime soon.”

This is backed up with data that suggests over the last 10 years luxury properties have increased three-times in the GCC in just 10 years, with 95 per cent operated by international management brands.

Luxury spending, especially in the region’s two largest source markets of China and India, is also on the rise – mainly driven by the increase in high net worth individuals under the age of 35.

According to Amr El Nady, head of hotels and hospitality MENA and executive vice president, Global Hotel Desk, this goes back to the current trend of millennial spending habits.

“The world of luxury is moving towards experiences and steering away from material goods” he says.

“This trend is also going a step further with companies whose previous focus lay outside the travel sector now paying close attention to luxury hotel brands. Their motivation is often to move into adjacent spaces and be able to add luxury hospitality to complement existing luxury brands.”

According to research compiled by Allied Market Research and published by Colliers International, there are a few ways hoteliers can take advantage of the GCC’s luxury segment – including increased boutique hotels that put emphasis on privacy and exclusivity, luxury resorts that can also serve as wedding and honeymoon destinations, more famous or iconic properties in prime locations, and nature and heritage concepts, such as eco-lodges.

“Experiential luxury travel is a key trend in 2019 and hotels are definitely part of the journey,” admits El Nady.

“As millennials are a rising population, the modern-day luxury consumers are increasingly seeking out experiences and placing less emphasis on acquiring material goods. As hotel markets are seeing strong demand for the high end experiential luxury travel they are responding by developing new spaces that cater to offering unique experiences.”

What’s next for luxury in the Middle East?

Despite cautiously optimistic growth numbers across the Middle East, with regards to investment in luxury experiences and a personal goods industry emboldened by e-commerce, the region can’t rest on its laurels.

Looking ahead, it’s expected that the luxury market will remain favorable. According to Bain & Company, the market can expect reasonable growth of around three to five per cent per year through to 2025. However, the wider region’s sociopolitical issues and global economic headwinds will challenge the industry in the short term.

There are three main dangers on the horizon for the region’s biggest purveyors of luxury. Namely, slowing tourist numbers (especially those from China), the advancement of technology outside the e-commerce space, and the influence of younger consumers.

Last year Chinese consumers made up 33 per cent of all luxury purchases in the world – but that is expected to rise to a whopping 44 per cent by 2025. However, it’s predicted that they will make almost half of those purchases in their native China (up from 25 per cent in 2017). If tourism spend drops, the Middle East as a region will need to address the opportunity in a new luxury Arab audience, to create brand loyalty, fuel luxury spending and foster market growth.

As e-retail continues to grow rapidly in the region, it will become necessary for brands to grow beyond simply selling online. While e-commerce with regards to luxury is only going up, digitisation also plays a huge roll in digital marketing activities, social media and influencers. These topics go beyond the product and the brand, and speaks instead to the original DNA of these brands. In the future, it’s expected that just about every luxury purchase – even done through traditional retail spaces – will be influenced by online interactions.

Finally, for a market that relies on a large expat community, the influence of younger consumers will only grow. It is new generations that will become the primary growth engine in the luxury markets, with Millennials and Gen Z expected to represent almost 55 per cent of the luxury market by 2020.

What’s clear is that the future of the luxury industry is very bright in the Middle East, despite short-term hurdles. Moreover, younger consumers and digital disruption will continue to affect brands. For those who are willing to adapt, the prospects are very positive.