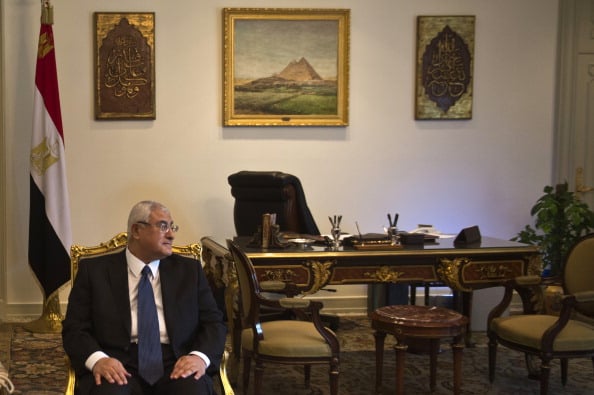 Egypt’s army-backed leaders swore in a new interim cabinet on Tuesday after a night of street violence, with not a single minister representing either of the main Islamist groups that have won five straight elections since 2011.

Seven people were killed overnight and more than 260 wounded in running battles between supporters of toppled president Mohamed Mursi and the security forces.

In an ornate hall in the presidential palace, 33 mainly liberal and technocratic ministers took turns being sworn in by Adli Mansour, a burly judge installed as interim head of state by the army when it deposed Mursi on July 3.

The armed forces chief who removed him, Abdel Fattah al-Sisi, was given the post of first deputy to interim Prime Minister Hazem el-Beblawi, a 76-year-old liberal economist who has been given the task of implementing a “road map” to restore civilian rule and repair a crumbling economy.

Not one of the new ministers is from either Mursi’s Brotherhood or Nour, the other main Islamist group. Together they have won two parliamentary elections, a presidential vote and two constitutional referendums since the 2011 uprising that brought down long-serving, army-backed autocrat Hosni Mubarak.

The army said it was carrying out the popular will when it removed Mursi after millions took to the streets to demand his resignation at the end of June.

A spokesman for interim president Mansour said Nour and the Brotherhood had both been offered cabinet posts and he believed they would participate in the transition.

The Brotherhood said it would never yield in its demand for Mursi’s return. Nour said it was reserving its judgment on the cabinet for now.

Crisis in the Arab world’s most populous state, which straddles the Suez Canal and has a strategic peace treaty with Israel, raises alarm for its allies in the region and the West.

Mursi’s removal has bitterly divided Egypt, with thousands of his supporters maintaining a vigil in a Cairo square to demand his return, swelling to tens of thousands for mass demonstrations every few days.

The ousted president is being held incommunicado at an undisclosed location. He has not been charged with any crime but the authorities say they are investigating him over complaints of inciting violence, spying and wrecking the economy.

Two people were killed at a bridge across the Nile in central Cairo and another five were killed in the district of Giza overnight in the worst violence in a week, said the head of emergency services, Mohamed Sultan. More than 400 were arrested.

“We were crouched on the ground, we were praying. Suddenly there was shouting. We looked up and the police were on the bridge firing tear gas down on us,” said pro-Mursi protester Adel Asman, 42, who was coughing, spitting and pouring Pepsi on his eyes to ease the effect of teargas.

The new cabinet faces a dire task rebuilding an economy wrecked by two and a half years of turmoil.

Saudi Arabia, the United Arab Emirates and Kuwait – rich Gulf Arab monarchies happy at the downfall of the Brotherhood – have promised a total of $12 billion in cash, loans and fuel.

Investors are sceptical that major reforms can be enacted before a permanent government is put in place. The new planning minister, Ashraf al-Arabi, said on Monday the Arab money would sustain Egypt through its transition and it did not need talks with the International Monetary Fund on a stalled loan.

Egypt had sought $4.8 billion in IMF credit last year, but months of talks ran aground with the government unable to agree on cuts in unaffordable subsidies for food and fuel.

Ahmed Elmoslmany, spokesman for the interim president, said the authorities expected the Brotherhood and other Islamists to agree to participate in national reconciliation.

“I am hoping and expecting, and I am in contact with members from the Muslim Brotherhood, and I can see there is an acceptance to the idea,” he said.

Senior Brotherhood figure Mohamed El-Beltagi said the movement had not been offered cabinet posts, and would have rejected them if it had.

“We will not see reconciliation unless it’s on the basis of ending the military coup,” Beltagi said at a square near a Cairo mosque where thousands of Mursi supporters have maintained a vigil into its third week.

Nour has been more circumspect. It did not directly oppose the toppling of Mursi, whom it criticised for his intransigence. But it has denounced the authorities for violence since then. It has announced a boycott of the transition but says it is advising the government and endorsed technocrats in the cabinet.

“We did not nominate Islamists or anyone from our party, as we want to come to power through elections, not by being hired,” senior Nour figure Nader Bakar told Reuters. The group had submitted names of technocrats for government posts and was studying the list to see if its recommendations were heeded.

By sunrise calm had returned. The latest unrest was less widespread than in the days after Mursi was toppled when 92 people died, but Egyptians still worry about continued violence.

At Tahrir Square, rallying point for anti-Mursi protesters, a Reuters reporter saw teenagers in civilian T-shirts being handed rifles by troops in an armoured vehicle. It was not clear if they were civilians or security personnel in plain clothes.

Washington, which supports Egypt with $1.5 billion a year mainly for its military, has so far avoided saying whether it regards the military action as a “coup”, language that would require it to halt aid.

The United States was never comfortable with the rise of Mursi’s Brotherhood but had defended his legitimacy as Egypt’s first elected leader. Its ambiguous position attracted outrage from both sides, which accuse it of meddling in Egypt’s affairs.

Washington has urged a rapid return to free elections. The fast-paced, army-backed “road map” to full civilian rule calls for a new constitution to be hammered out within weeks and put to a referendum, followed by parliamentary elections in about six months and a presidential vote soon after.

A former ambassador to the United States became foreign minister and a U.S.-educated economist is finance minister. A police general was put in charge of the supply ministry, responsible for the huge distribution system for state-subsidised food and fuel.

In a last-minute change, the post of culture minister did not go to the musician whose appointment was announced a day earlier. It was unclear why Ines Abdel Dayem was replaced. When the Islamist-led government fired her in May as head of Cairo Opera, artists and intellectuals had mounted a protest campaign.