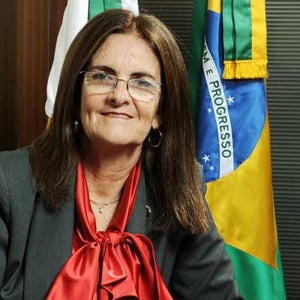 With her nomination as chief executive of Brazilian oil giant Petroleo Brasileiro, Maria das Gracas Foster is the first woman to run one of the world’s top five oil companies. She currently runs the natural-gas and power division.

Petrobras currently has the oil industry’s largest investment plan with a $225 billion proposal to double oil output by the end of the decade. Foster will oversee drilling for oil as deep as six kilometers beneath the Atlantic Ocean in the offshore Lula field that holds an estimated 6.7 billion barrels of oil.

Foster, a chemical engineer by training, brings 34 years of experience to the job. She started at Petrobras as an intern in 1978 and has worked her way steadily up the ranks. The only deviation on her career path at Petrobras was a three year stint working for the Brazilian energy ministry, a valuable experience as 51 per cent of Petrobras’ voting shares are owned by the government.

Foster was nominated by President Dilma Rousseff in a drive to increase female participation in her government. The two first met when Rousseff was the energy secretary for the state of Rio Grande. Brazil’s first woman president has appointed at least eight women to cabinet posts since she took office a year ago.

Foster is taking over from Jose Sergio Gabriellli who resigned to pursue a career in politics. Foster is reputed to work seven days a week and she more than doubled Petrobras’ gas and power business in the first nine months of last year.