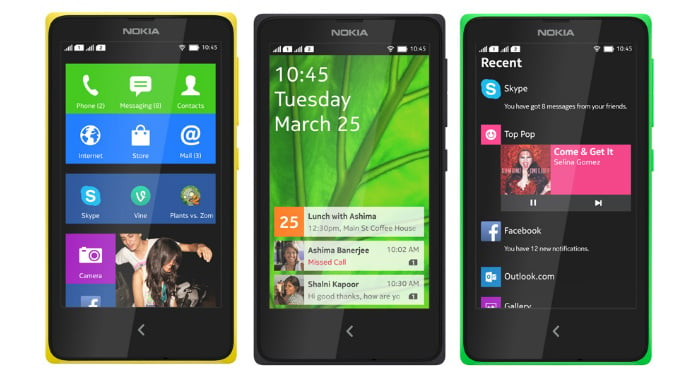 Nokia’s new affordable smartphone, Nokia X, based on the Android open source project, launches on Sunday, March 23, in the UAE, the company announced.

Priced at Dhs439 in the Emirates, the device is part of the new Nokia X family of smartphones, unveiled at the Mobile World Congress in Barcelona in February.

Measuring 10.4mm, the phone features a 4-inch scratch-proof display and exchangeable back covers that come in a range of colours including bright green, bright red, cyan, yellow, black and white.

The device runs on the Nokia X Software Platform and is powered by a1Ghz dual core Qualcomm Snapdragon processor. The dual-SIM device comes with 512MB RAM and 32GB expandable memory and a 3MP camera.

(Watch: Video: Hands On With The New Nokia X Range )

While users can download Android apps, the Windows interface will also allow access to signature Nokia features such as HERE Maps and MixRadio and Microsoft services such as Skype, Outlook and One Drive. People can access apps from Nokia store and all devices are also pre-loaded with third-party apps and games.

“We have a lot of equity, lot of recall and people still trust the brand in that price-point. It’s a loved brand in that segment of $150 or below.

Nokia chose to use Android open source since it was impossible to bring down the Windows OS-based Lumia phones to the same price-range, said Mehta.

“The ultimate objective is to make Microsoft the next ecosystem and make Lumia a big brand under the smartphones segment. So Lumia on Windows phone remains our smartphone strategy; the Nokia X will be never be a flagship,” he added.

Neelesh Bhatnagar, the CEO of Emax, says he expects the phone to perform well in the market especially because of its pricing.

“I was surprised by the pricing of the X-series. After looking at the phone in Barcelona, I thought they will price it at about Dhs999 or something like that, but it’s coming for less than Dhs500. I mean for that phone to come at that price, it’s absolutely phenomenal. That will convert a lot of feature phone customers to smartphones.”

The use of Android open source will help boost sales, he said.

“I think that was one of the drawbacks of Nokia. Although the Nokia X is not an Android based phone, but now that Android apps can also be downloaded, that will make it compete very well with the other brands using the Android OS,” said Bhatnagar.

The Nokia X will be launched across the GCC market in the next 10 days. The Nokia X+ and the Nokia XL, the higher-end versions in the Nokia X family, are expected to be launched in the UAE in the second quarter of the year, confirmed Mehta. The pricing for both the devices will be announced closer to the launch date, he said.