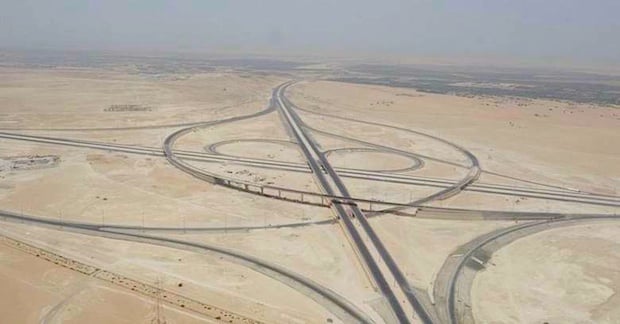 A new 62km highway connecting Abu Dhabi and Dubai is now 98 per cent complete and on track to be opened by the end of this year.

An extension of the Sheikh Mohammad Bin Zayed Road, the new highway begins from Seih Shuaib at the Abu-Dubai border.

It will pass through the Forest Belt, Al Maha Forest, Kizad, Khalifa City, cross Al Ajban Road and then pass by Abu Mureikha, Zayed Military City and Al Falah area. It will then connect to the Sweihan Interchange on the Abu Dhabi-Sweihan Road.

It will have four lanes in each direction and have the capacity for 8,000 vehicles an hour.

The Dhs2.1bn project is being executed by the Abu Dhabi General Services Company (Musanada) in co-operation with the Department of Municipal Affairs and Transport. Work on the project began in the first quarter of 2014.

The project’s execution follows a detailed study of the volume of daily traffic between Abu Dhabi and Dubai.

The highway is expected to serve as an alternative route to the existing E11 Abu Dhabi-Dubai highway. It will also provide additional capacity – particularly during peak hours and weekends.

The road will enhance the quality of infrastructure and strengthen the economic development of the emirate, Musanada said in a statement.