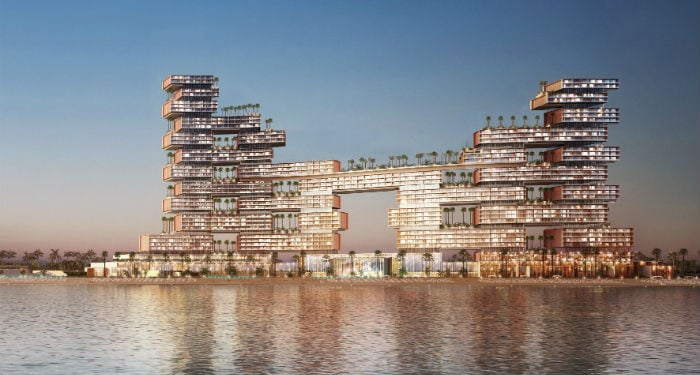 Located on the crescent of The Palm and next to the Atlantis resort, the resort will stand 46 storeys tall and feature private gardens and infinity pools.

To be developed in association with Kerzner International, the project will also house recreational, entertainment and services facilities, according to ICD CEO Mohammed Ibrahim Al Shaibani.

“This next phase of Atlantis, including the luxury residences of The Royal Atlantis, will continue to drive the growth of Dubai forward,” said Al Shaibani. “This investment reaffirms ICD’s commitment to support the long-term growth of our domestic hospitality market, a key pillar and growth sector for the Dubai economy.”

Sheikh Mohammed, who was briefed on the design concepts and architectural masterplan of the project on Sunday, said that it should be fully implemented by 2018.

Government-owned ICD is also undertaking the One Za’abeel project, estimated to cost Dhs2.5 billion, which will include 550 residential units, two hotels and 130 hotel apartments.

Located between the Dubai World Trade Centre and Za’abeel Park, it will consist of two towers (residential and commercial) linked by a suspended bridge.

Al Shaibani also confirmed that the first phase of a Dhs8 billion Dubai Waterfront mixed-use project is on track for completion by the end of 2016.

Sheikh Mohammed was also briefed about the Warsan project, which is spread across around one million square metres on Aweer Road. The project includes 2,100 residential units and a boarding school. The project’s first phase is expected to be completed within three years with an approximate cost of Dhs2.5 billion.

ICD is also developing a new Atlantic Hotel and Resort in China, in cooperation with Kerzner International Holdings. Located in Sanya city, Hainan Province, the new resort will be constructed on more than 60 hectares of land. Slated for completion in 2016, it is set to become the first luxurious resort of its size in China.

Sheikh Mohammed said the projects would develop and diversify the UAE’s economy.

“They reflect the strength of our economy and its ability to grow steadily,” he said.

After completion, all of ICD’s projects together are expected to contribute 10 per cent to the national economy, the WAM report added.